Rob Penney to leave Munster at end of season 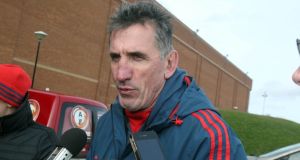 Rob Penney will leave the Munster at the end of the season. The Kiwi, who joined the Province in 2012, initially negotiated a two year deal with the option of a third year as head coach with the province.

However, Penney has declined an offer to extend his stay and will leave along with fellow New Zealand backs’ coach Simon Mannix, who joined Munster at the same time.

According to a statement released by Munster, Penney has attracted the interest of an unnamed club that has offered him terms “that are in line with Rob’s long-term needs.”

The province have not indicated who will take over from the New Zealander, who led a group of coaches including former Irish number eight Anthony Foley and Ian Costello. Foley and Costello are also out of contract at the end of the season.

“I am disappointed to be leaving Munster as I have thoroughly enjoyed my time here,” said Penney in a statement. “I have to take this opportunity presented to me and prioritise my family and personal circumstances at this time.”

Ireland captain Paul O’Connell spoke on the issue at Carton House today, stating that Penney will want to be closer to his native New Zealand, where his children will be enrolled at university. “I know they were eager for him to stay for another year and I think it’s a pity he won’t be staying,” said O’Connell.

“It’s a shock; I suppose I’d heard rumours. It’s disappointing, but he’s got to do what’s right for his family.

“Hopefully Munster will put someone in place quickly who can continue the improvements Rob has brought in the last two years.

“With us having qualified for the quarter-finals there will be a lot of interest in the job, which is great for Munster.

“So this just moves him back closer to there. In terms of continuity I’m sure coaches like Anthony Foley will be kept on at the club, so there’s plenty of stability there.”

Munster Chief Executive Garrett Fitzgerald said: “When we reach the end of the season Rob will leave with our thanks and best wishes for the future.”

“Rob has been a very positive influence on this Munster squad and management and we are disappointed to see him go as we had hoped that he would fulfil his third season. In developing the squad he has highlighted the strength and depth of the Munster panel, with the competition for places as high as ever.

“I would also like to take this opportunity to thank Simon for his work and commitment to the province, and we wish him all the best for the future. He has contributed to Munster’s overall campaign and added great value to our coaching team.

“We now need to focus on the remainder of this season and the opportunities ahead in both the Heineken Cup and the RaboDirect PRO12. We are confident both Simon and Rob will continue to strive for success and guide the squad through to the next stage.”

1 Gordon D'Arcy: Ireland must go after victory by frightening France into mistakes
2 Robbie Henshaw likely to be the only Irish change for France finale
3 Seán Moran: Will a silent, empty Hill help to loosen Dublin’s grip on Sam?
4 Cian Healy: ‘Realistically I got away with murder when I was younger’
5 Warren Gatland: England players could miss Lions tour if not released for Japan warm-up
Real news has value SUBSCRIBE