‘He likes the game to be played in its purest form; a running game, with ball in hand’ 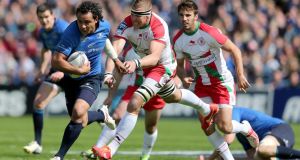 “Joe was the first name I thought of,” said the departing Isa Nawa (above in action against Biarritz on Saturday), who was mentored by Joe Schmidt at the Blues in 2004. Photograph: Inpho

This rapid and surprisingly smooth process to appoint Joe Schmidt as Ireland coach has a nucleus. When it was established Michael Cheika was leaving Leinster in 2010, Isa Nacewa was asked about his favourite coach.

“Joe was the first name I thought of,” said the departing Aucklander, mentored by Schmidt at the Blues in 2004.

“Every team he has been involved with has been successful. The quality that he brings to get the best out of players on and off the field is one of his best attributes and obviously that translates into good performances on the field.”

Many a decent coach has struggled badly in the Test arena so why will Joe be different? More importantly, can the way he coaches Leinster be replicated in the depths of February after little preparation time and a massive English or French pack pounding away in the dank, windswept elements?

“I think so,” said Richie Murphy, Leinster skills coach and soon to be the highest ranking homegrown coach in Ireland.

“It is his attention to detail when analysing the opposition’s weakness. Every defence has weaknesses and if you can design your play and you can exploit that, I think that is where he has been incredible.

Purest form
“He likes the game to be played in its purest form; a running game, with ball in hand and, I suppose that is what he drove through the team and the players responded to that at first.

They say Schmidt never sleeps and that the Ireland job was the only chance of getting him to stick around (the French clubs were sniffing around).

“His work ethic is incredible,” Murphy continued. “He’s in here 24-seven and seven days a week. His relationship with both the staff and the players is second to none. You couldn’t really say enough good things about him.”

Kevin McLaughlin’s career seemed over until revived by Cheika. Injury-free for long periods since, he has been a Schmidt favourite on the blindside flank, even with the ridiculous wealth of talented backrow options at the club.

You see, Schmidt trusts players and that’s all a player really wants. “Which is another huge positive for the country,” said McLaughlin. “He is really good at seeing talent in guys, putting the reins in their hands and saying, ‘Here’s what you got to do, now go out and do it.’

“I think it’s going to be great, genuinely I do. Obviously it’s a new challenge for him because he doesn’t get to work with the guys every day of the week.