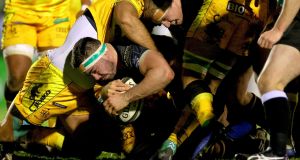 Connacht’s Paul Boyle scores his third try of the game in their Pro14 win over Benetton. Photo: James Crombie/Inpho

This rescheduled round four Pro14 fixture was always about Connacht capitalising on the game in hand to leapfrog Scarlets into second place in Conference B and maintain their push for a playoff place. In the end they achieved their ambition, notched their fourth win from six, and consigned Benetton to their seventh straight defeat this season.

Connacht coach Andy Friend had opted to retain the XV selected for last weekend’s postponed Ospreys match and the players repaid his confidence, running in five tries, while No 8 Paul Boyle crowned his first captaincy with a hat-trick and man of the match.

Enjoying the best of a strong wind in the opening half, the home side were off the mark after 15 minutes – a superior scrum providing a succession of penalties before Boyle strode over from a five metres for the first of his two tries before the break.

Controlling possession, Connacht capitalised once again from a penalty to touch. Conor Oliver set up the maul and wing Peter Sullivan joined at the back before touching down for his first try in a Connacht jersey.

Connacht replied almost immediately, kicking deep from a penalty after Benetton centre Tommasco Menocello was yellow carded, and from the penalty to touch Connacht exploited the midfield gap with Peter Sullivan providing Alex Wootton who finished in the left corner, stretching the lead to 17-7.

Good work from Buckley provided the turnover for the fourth try before Boyle burst from the back of a scrum to race in from 30m for the fourth try and it was all over when he added his third and Connacht’s fifth after 54 minutes. The Italians, despite scoring a converted try through outhalf Dewalt Duvenage, remain rooted to the bottom of Conference B.

Replacements: M Healy for Sullivan, D Robertson-McCoy for Aungier (47), U Dillane for Thornburgy (52m), J Murphy for Delahunt and P McAllister fo Buckley (both 55), C Prendergast for Butler and S O’Brien for Arnold (60).

Replacements: I Nemer for Quaglio and T Pasquali for Alongi (54), J Riera for Keatley and M Zuliani for Menoncello (56), A Sgarbi for Pettinelli (58), L Petrozzi for Braley (60), R Favretto for Herbst and G Nicotera, for Bravelle (64).