Stuart McCloskey back for ring-rusty Ulster against Cardiff 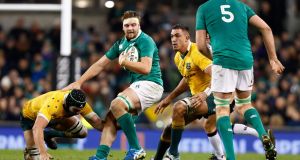 The presence of Iain Henderson in the backrow, returning from international duty, is a huge plus for Ulster. Photograph: Inpho

Stuart McCloskey’s recovery from a foot injury that has kept him sidelined since September is an important fillip for Les Kiss as his side heads to Wales looking for an upturn in recent fortunes. The fact that their game against Zebre was postponed last time out leaves them a little rusty match wise as a team.

McCloskey partners Luke Marshall in midfield while there is plenty of footballing ability in the back three. Brett Herron’s task alongside the consistently excellent Ruan Pienaar is to maximise that cutting edge.

The challenge will fall at the hands and feet of the front five, an area where Ulster have occasionally looked a little underpowered but the presence of Iain Henderson in the backrow, returning from international duty, is a huge plus. Chris Henry will finally get to play his first match since last season.

Cardiff have Gethin Jenkins, Sam Warburton, Lloyd Williams and Alex Cuthbert back in the starting line-up and will be hoping to atone for what they feel was a missed opportunity last time out in defeat to Connacht.

The home side have won just one of their last five league matches while Ulster are on a run of three defeats. Given the relative strength of the teams, Cardiff will start as marginal favourites but if the visitors can get some quick ball, they have the players to capitalise.