Neck injury could keep Cian Healy out for rest of season 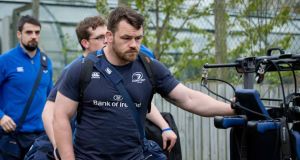 Cian Healy is likely to miss the rest of Leinster’s season as he battles with a neck injury. Photograph: Inpho

It was one of those answers that was designed to give information but made the class more curious. On Thursday as Leinster coach Matt O’Conor talked about why Cian Healy was not in the squad the more he said the more intriguing the issue became.

Healy is again unavailable for this week and possibly next week. The prop’s neck is a source of concern to the Irish camp and now rather than later is the time to sort it out.

“Cian picked up a bit of a stiff neck,” said O’Connor. “He’s not playing this week and we’re doing a few investigations in relation to that.”

The August international matches and World Cup now appears to be his main focus as Leinster face into a tense match against Treviso.

“Potentially yeah, we don’t know at this stage,” said O’Connor about Healy not playing again for Leinster. “He’s in the hands of the medics at the moment so we will have to wait and see. It’s an old injury that he’s been managing through.

“The medical decision was to get it repaired and try and do that as quickly as possible for what’s around the corner obviously,” added the coach.

“It was just off the back of the tight games and the Six Nations schedule and everything that he has gone through the past couple of months. Hopefully it is not too serious.”

Shels chairman Andrew Doyle hits out at ‘appalling’ FAI governance 20:39
David Silva set to join Lazio after leaving Man City 20:38
Spurs complete signing of Pierre-Emile Hojbjerg 19:27
Linfield could get bye after opponents placed in quarantine 19:19
Champions League feast awaits but no party time in Lisbon 18:44
Here is your handy guide to sport on television this week