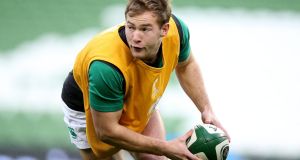 Zebre may offer thanks for small mercies as they are able to field four of their 13 Italian internationals, prop Dario Chistolini, backrower Dries van Schalkwyk, outhalf Kelly Haimona and centre Giulio Bisegni, to bolster a side thumped 52-0 by Leinster last weekend at the RDS.

It was the second heaviest beating that the Italian franchise had suffered in their history and they won’t be too chipper about facing a Connacht side, whose attacking prowess is reflected in a Pro12 leading 36 tries scored in the campaign to date.

There probably isn’t a quicker back three in the competition than Tiernan O’Halloran, Niyi Adeolokun and Matt Healy while Bundee Aki and Craig Ronaldson have qualities that complement one another’s game in the midfield.

The key, as always, is the quality of possession to unsheathe that cutting edge. Kieran Marmion returns to partner AJ MacGinty at halfback while prop Finlay Bealham has been released from the Ireland squad training to play.

The absence of Ultan Dillane from the match day squad suggests he may be required by Ireland next week in the light of Mike McCarthy’s season-ending concussion.

Connacht coach Pat Lam admitted: “There’s no doubt they will be fired up to make amends for their big defeat to Leinster last week. We’ve seen what they can do to teams this season, particularly on their home ground, so we will need to be right on top of our game mentally.”

Zebre lost by four points to Munster and three to Gloucester in their most recent home matches across two competitions but that was with a much stronger squad. Connacht should win and with a bonus point to boot.