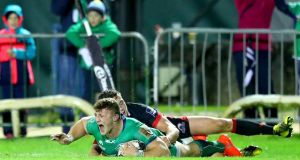 Peter Robb, try scorer in Connacht’s win over Edinburgh on Friday night, has signed a new deal with the province. Photograph: Inpho

Connacht have announced five players have signed new contracts with the Pro 12 champions.

Acadsemy graduates Sean O’Brien, James Connolly, Peter Robb and Caolin Blade have all extended their deals with the province until 2018.

Meanwhile 22-year-old Ukranian-born prop Ivan Soroka has signed a professional contract for the season having impressed while on trial from Clontarf RFC.

The champions picked up the first win of their title defence against Edinburgh on Friday night, running out 28-15 winners with Robb among the try scorers.

And with his side now off the mark coach Pat Lam has said he is pleased to retain the quarter of homegrown players: “I have always said that retention is a very important part of what we do. It is vital that we hold on to young players like these who have come through our Academy to the senior set up and demonstrated that they have the talent and the right attitude to perform on and off the pitch. These four young men certainly showed their potential by playing a big part in the success of last season

“Ivan (Soroka) has also been offered a contract for the season. Like Niyi (Adeolokun) a few years ago, we gave him a chance to come straight in from club rugby on a trial and he has shown that he has the potential and drive to succeed in a professional set up. It’s a great opportunity for him.”