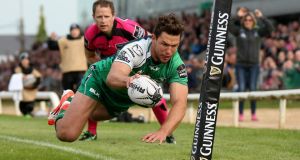 Connacht opened the new Guinness Pro12 campaign with an encouraging victory over the Newport Gwent Dragons in Galway.

Eoin McKeon and Danie Poolman touched down in either half as Pat Lam’s men, who ended last season with five successive league defeats, got back to winning ways.

The sides were level at the break — 8-8 — with a Nic Cudd try and Jason Tovey penalty cancelling out McKeon’s ninth-minute touchdown and follow-up penalty from Darragh Leader.

The Connacht pack got on top during a crucial second half spell when the visitors’ new captain Lee Byrne and centre Tyler Morgan were both yellow carded.

The Welsh region could not respond with a try but a 75th-minute penalty from Tovey earned them a losing bonus point.

Connacht were quickest to settle and Leader almost put them ahead in the fourth minute when he struck the post from a long range penalty.

The Dragons were guilty of a number of early mistakes and Connacht hit them on the counter with a free-flowing try.

McKeon was put over by new winger Niyi Adeolokun after young full-back Shane Layden had sparked the attack with a clever dummy and run from deep.

Leader made it 8-0 with a well-struck penalty from in front of the Sportsground’s Clan Terrace, a justifiable lead given the westerners’ play during the opening quarter hour.

But the complexion of the game changed during the second quarter as the Dragons began to make headway — although Tovey pulled his first penalty attempt wide in the 21st minute.

Barely two minutes later, the men of Gwent put good width on the ball to outflank the Connacht defence and debutant Byrne sent flanker Cudd over in the corner. Tovey was unable to convert.

Ian Porter, Connacht’s new scrum-half, went close to gathering his own chip as he threatened a quick response, however the hosts were down to 14 men after McSharry pulled back Jonathan Evans as he took a quick tap penalty.

Tovey knocked the resulting penalty through the posts to equalise and the Welsh region were looking increasingly assured, particularly full-back Byrne who was making good use of the possession which came his way.

But Connacht dictated in the third quarter as the Dragons’ indiscipline put them under pressure. Byrne saw yellow for making contact with Jack Carty in the air and Leader landed the three-pointer to move the hosts back in front.

Morgan followed his skipper off the pitch five minutes later and Connacht — with their scrum and maul gaining key yards — then conjured up their second try when Carty’s well-weighted kick produced an excellent take and finish by winger Poolman.

Leader missed the touchline conversion and Tom Prydie was also off-target with a penalty attempt from distance, while the Dragons forwards drew breath.

Connacht replacement Miah Nikora dropped a difficult penalty short, but their pack disrupted a promising line-out maul from the visitors and a forward pass ruined a Byrne-inspired attack.

Although Lyn Jones’ charges pressed in the dying minutes, a final penalty from Tovey was all they could muster as Connacht deservedly hung on.

1 Gordon D’Arcy: Losing such a big game shines a very harsh light on certain players
2 Born to ride, born to win: Sam Bennett, the making of a green machine
3 The Offload: Saracens prove Pro14 is not fit for purpose
4 Ken Early: Like Napoleon, Mourinho is the outsider always trying to prove himself
5 Seán Moran: Fallout from Tyrone final celebrations will concern GAA
Real news has value SUBSCRIBE