Cian Healy pledges another three years to Ireland and Leinster 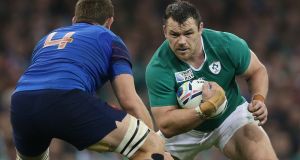 Cian Healy’s playing future was confirmed after he penned a three-year central contract with the IRFU that will see him stay at Leinster and Ireland until after the 2019 Rugby World Cup in Japan.

It brought to a swift conclusion speculation that he had been considering offers from the Worcester Warriors and Toulon. The priority for the player now will be to try and concentrate on the rugby side of affairs and hope that a ridiculously unfortunate run of injuries, that included neck, hamstring, ankle and knee setbacks can be consigned to the past.

He returned to competitive fare against Zebre at the RDS last weekend and, depending on what Ireland coach Joe Schmidt decrees, may further hone his match fitness by playing for Leinster this weekend in a Guinness Pro12 game against the Cardiff Blues at the Arms Park. The Irish squad is currently training at Carton House ahead of their Six Nations game against England at Twickenham on Saturday week.

Healy made his senior debut for Leinster against Border Reivers in May 2007 and has amassed 148 appearances for Leinster scoring 17 tries.

Healy toured with the series winning British & Irish Lions in Australia (2013) although his tour was cut short due to an ankle injury. He has won three European Cups, a Challenge Cup and two Pro12 league titles with Leinster and two Six Nations Championship titles with Ireland.

He has watched Jack McGrath take a firm grip on the number one jersey for club and province in his absence with a series of excellent performances. Healy said of his decision: “I feel that I am coming back to full fitness now and would like to thank the medical and S&C teams for their ongoing support.

“There are a lot of exciting young talented players coming through at Leinster and Ireland and I am looking forward to competing for silverware over the next few seasons.”

The IRFU’s performance director David Nucifora said: “Cian is one of the most explosive athletes in world rugby and has proven for both Ireland and Leinster his ability to compete at the highest levels of the game. We are delighted that Cian has committed to playing in Ireland up until after the 2019 Rugby World Cup in Japan.”

Meanwhile, Pro12 leaders Ulster have a number of injuries ahead of their clash with the fourth-paced Scarlets at the Kingspan Stadium on Sunday. Hooker Rob Herring will learn the outcome of a scan on a hamstring soon, scrumhalf Ruan Pienaar is going through the return-to-play protocols following a head injury while Louis Ludik and Rory Scholes are back in training. There is still no word on a return to play date for Dan Tuohy (foot).

Ulster scrumhalf Paul Marshall admitted that the memory of their performance against the Scarlets earlier in the season would be a motivating factor. “I think that’s the only game when we didn’t get any points. We gave away the penalty at the end right in front of the posts and it was a big disappointment.

“They’re a good outfit. They started the season so well. They were winning every week. They beat us, they beat Glasgow, from our point of view we know it’s going to be tough game. Scarlets, and then the likes of Edinburgh and Connacht, for me they’re the most improved teams in the league. The boost they’ve had has made the league so competitive.”

Roger Wilson will make his 200th appearance for Ulster if he is selected and Marshall enthused: “It’s phenomenal. As a backrower as well, 200 games here, over 100 at Northampton. I admire him as a player and a person in his willingness to keep going. He’s available to train almost every day.

The Ireland women’s sevens team have been drawn in Poll A alongside Australia, Canada and Fiji in the second round of the HSBC World Rugby Women’s Sevens Series in Sao Paulo on Saturday and Sunday.