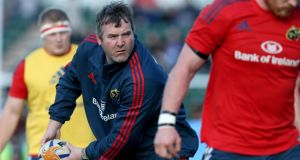 Anthony Foley: reports his Munster squad is coming together nicely for the new season.

New Munster coach Anthony Foley said the job is consuming him 24-7 but he is loving every minute of being in charge of his native Munster.

The former Irish captain, who was overlooked for the job when Rob Penney was appointed two years ago but who has since served as forwards coach, said yesterday that the start of the new season can’t come quick enough.

“It’s everything I expected it would be. It’s a handful, it’s something that you think about 24-7 and you do that anyway and it’s important that you’re clear on what you’re doing, you’re clear on communication.

“We’ve obviously had a massive overhaul of our backroom staff during the year. As a group we’ve changed and it brings a lot of freshness and a lot of excitement around the place.”

And the former Irish captain was quick to praise the women’s win over New Zealand in the World Cup this week. Foley, whose sister Rosie is a former Irish international who won 39 caps, said that the shock win was an inspiration to everybody. “It’s brilliant, they’ve stuck so well together. They’re obviously a very coming side, they’ve built off a Grand Slam.

“But to beat the Black Ferns in the manner they did with the mentality that they had towards the end of the game, it shows that they are a side that can go all the way and not be afraid to win it. You would wish them all the best for their next game against Kazakhstan. ”