Andrew Smith hoping to bow out of Munster with a flourish 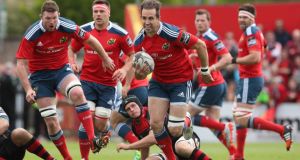 Australian centre Andrew Smith will move on from Munster after playing an important part in their run to the Guinness Pro 12 final. Photo: Billy Stickland/Inpho

All the fanfare will revolve around the big fella in the number five jersey, whereas in keeping with his highly efficient if understated season with Munster, Andrew Smith will also bid adieu after Saturday’s Guinness Pro12 final, albeit more through the tradesman’s exit.

Despite missing two months of the season with a knee injury, the 30-year-old from Sydney has effectively been an ever-present, which is what an overseas player has to be given their value and importance to the provinces. In his 20 games, he has scored five tries, developed a settled midfield partnership with Denis Hurley and gone about his business with assurance, a good skills set and a very low error count.

Drier, end-of-season, top of the ground conditions, and Smith’s increased familiarity with his team-mates has seen his game flourish in tandem with Munster. He’s also run in five tries, and in those 20 games Munster have won 15, drawn one and lost four. In the nine games without him, they have won four, drawn one and lost four – a 50 per cent winning ratio compared to a 72 per cent winning ratio when he has played.

“I definitely think I’ve been playing better and better. As combinations grow and you start to learn how players play around you, that makes your job easier as well.

“I’ve learned how to play with Denis and the backs around me as they’ve come back from internationals. With new coaches as well – getting the structures across has probably taken a little bit longer and over the past few months we’ve been playing a lot better rugby, our attack has been a lot sharper and we’ve been a lot more dangerous. Yeah, I think we’re playing better rugby at this stage of the season.

“There were some tough conditions earlier in the year but of late we’ve had some good sunny afternoons and I guess that gives the backs the chance to throw the ball around a bit more and show off their attacking skills and so, yeah, the weather does help.”

Now he too has the chance to finish off his time with Munster on an ideal note. “Yeah, it’s a big week ahead. It’s exciting for the team, winning this trophy is what we have been aiming for all year and to have the opportunity this week is massive for us and the guys will be ready for it, that’s for sure.”

The win over the Ospreys in an exhausting, physically tough semi-final which went to the wire and beyond, left Munster a little battered and bruised and Smith was no exception.

“The body after the weekend was pretty sore. It was a tough game, probably one of the hardest of the year. I’m just managing the body at this time of the season and just getting it right for the weekend. Finishing my time here with a trophy would be massive and that’s what we want to do.”

“It’s been a great year with the guys and the fans. It’s been incredible to experience the atmosphere here at those big European Cup games. It is nothing like anything you’d experience back home. It’s amazing and they are a memory that will last forever.”

As to the future, the arrival of Francs Saili along with the presence of Tyler Bleyendaal means Smith is moving on, but he is not sure where his next port of call will be, other than he will stay in Europe.

“We’ll work that out in the coming weeks. I’ve really enjoyed my time here and have become very comfortable in the set-up and with the coaches and all that. I’ve also had a good time with the family. But we’re just not sure of what the next step is at the moment. We’ll just have to wait and see.”

He’ll move on with regrets, but no bitterness, and understands that it was always likely to be a one-year deal. “I probably came over thinking that I might hopefully stay but I wasn’t sure how it would go and what I would have planned for myself for myself and the family. Whatever happens, happens, and I’m happy with that.”