Head coach led Connacht to the Pro12 title last year, in his third season at the helm 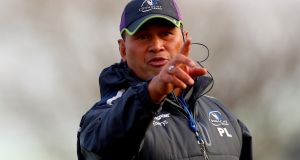 Connacht head coach Pat Lam will leave the province at the end of the season.

The New Zealand born coach led the team to the Pro12 title last season, in his third year at the helm.

He will join English Premiership club Bristol in June to begin preparations for the start of the new season.

Connacht confirmed the news on Monday morning, explaining that the former Samoa captain, currently in his fourth season with Connacht, “will finish up next summer to take up a new coaching role.”

Guinness Pro12 player of the year for last season, Bundee Aki who in October signed a new long term deal with the province - turning down offers from clubs in England and France - tweeted that he was “feeling pissed”.

“This has been one of the most difficult decisions I’ve had to make in my life as Connacht and Galway is such a special place for myself and my family. The friendships, support and memories we all have experienced throughout our time in the West of Ireland is truly heartfelt and will never be forgotten.

“I feel extremely blessed to have been given an opportunity four years ago to build on the excellent work of Eric Elwood. I’m very proud that I can now pass on the baton with the knowledge that Connacht Rugby is truly seen as one of four strong provinces of Irish rugby.

“Rugby should never be about the individual as players and coaches will always come and go. We have worked hard to have the structures and systems in place to ensure the future success of the province for our community. I truly believe that through our strategic plan and the vision of Grassroots to Green Shirts, Connacht Rugby is in an extremely strong place going forward.

“There is a lot of rugby to be played between now and the end of the season and myself, our management team and the players are fully committed to our goals on and off the pitch. We are heading in to Champions Cup rugby this week on the back of so much hard work over the last number of years. We want to continue to inspire our community and we have many more opportunities on and off the field to do that this season.”

Lam signed a new three-year deal with the province last January, to remain in his position until the summer of 2018. Connacht CEO Willie Ruane added:

“Firstly I’d like to thank Pat for everything he has done for Connacht Rugby. He led the province to a first ever trophy and that will be something that will live long in the memory. While there is a lot of rugby yet to be played this season, we wish Pat, Steph and their family the very best in the next chapter of their lives.

“Connacht Rugby has made a huge amount of progress over the last number of years, with Pat building on the great work of those who went before him and we remain extremely confident and excited about the future.

“As a club, we will immediately engage with our Professional Games Board and the IRFU with respect to starting the process of recruiting our next head coach.”