Munster have the wherewithal to maintain their momentum in Pool Six 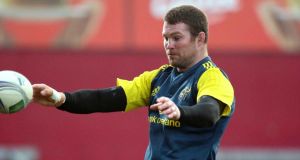 The positive result of the ruthless manner in which Munster reacted to their collapse in Edinburgh in October could be erased today. That’s how fine the margin becomes after losing in round one.

Really, there’s no margin for error at all. Looking from a positive angle, should Munster carve their way through the Perpignan eight, as they did in Thomond Park, then Pool Six will be theirs to own in January.

Naturally the French – littered with Polynesians, a Scot and English captain – will find another level of intensity at home but leaving Welsh duo James Hook and Luke Charteris out of the squad is evidence of refocusing ambition on domestic matters.

(At least the subplot of Lifeimi Mafi seeking to haunt his old friends should provide us with some hefty midfield collisions).

Munster are going the other way with Donnacha Ryan returning from injury to partner Paul O’Connell at secondrow. Donncha O’Callaghan makes way.

Peak fitness
Sean Dougall muscled his way into the Munster backrow recently and impressed in last weekend’s 36-8 victory but Tommy O’Donnell is another mad keen to return and nearing peak fitness.

O’Donnell was inching onto the national stage, impressing on the North American tour, before a knee problem took his name out of contention.

He’s on the bench today.

It’s also a big moment for Cathal Sheridan. The fickleness of this attritional sport is best shown by Conor Murray climbing into the realm of world class scrumhalves – even the Kiwis respect him now – and picking up a tasty IRFU contract only to succumb to a knee injury.

Sheridan’s arrival gives him the chance to augment the pool of Irish scrumhalves.

Concerns over Ian Keatley’s dead leg have also been allayed so he starts ahead of JJ Hanrahan.

It seems fairly certain Peter O’Mahony’s pack will get this halfback pairing plenty of possession; how they use it will decide the outcome.

“We are fortunate to have a few guys who have been down there to experience that, so we will be drawing on that,” said head coach Rob Penney of the 2009 victory. “It is intimidating and a really difficult place to go but yeah I think guys are aware of that.”

Really the Murrayfield malaise feels like a godsend today. No better motivation in Europe than fear of a second defeat.

“If we can control the things we desperately need to control and we recover from last week and we mentally apply our focus in the last 48 hours before kick-off then we give ourselves a starters’ chance in a really hostile environment. If we don’t do that well it will be a different story.

“So if you put those sort of things together we’ve actually done pretty well, I would think, in the European competition, given where the team’s at . . . . . If we’d been walloped in any of those games it would be a different story but we haven’t been.”

Munster know better than most building consistency t must be done on the road. In places just like this. Penney’s team look in decent shape. What is going through the collective Perpignan psyche is anyone’s guess. But they do like playing on their own field.

Early scores will matter yet it feels like Munster can get what they need to last.