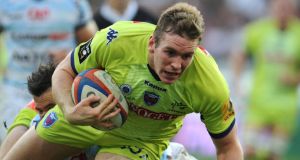 The 27-25 victory handed the Irish bragging rights to Bernard Jackman and Mike Prendergast, who are the principle coaches in Grenoble, a club who are now seen as serious contenders for a top six finish in the French championship.

Former Leinster and Ireland hooker Jackman, well known to Racing outhalf Johnny Sexton, who did not lineout for the Parisian club and Prendergast, a former Munster player when Racing kicking coach Ronan O’Gara was ruling the outhalf position, are in fourth place on the table.

There’s a mini-Irish revolution going on in Grenoble with Irish centre and try-scoring Chris Farrell also starting. Grenoble have now won four of their opening seven matches with Racing on the same win strike-rate but two points behind.

Andrew Farley is also on the Grenoble management team. Farley spent six seasons at Connacht Rugby and played with Ireland A before he signed for the then D2 side. After only one season he was named captain and has now joined the backroom staff.

Scrumhalf Tomás O’Leary came into the match after 53 minutes, and centre Eamon Sheridan started the game on the bench for Irish but after a masterclass, and 17 points, in kicking from Shane Geraghty, the Irish, and director of rugby Brian Smith, left Welford Road a satisfied bunch.

Geraghty sealed the win with a kick for Irish in the last minute of the match. Smith’s side had suffered heartbreak in last week’s clash with Saracens, losing with a last-minute try, but this week held their nerve to secure a big win.

“I know this club, they are very proud and I knew they would fight back after last week. For us the result gives us momentum and momentum is everything,” said Smith.

It means Leicester where Paul Burke and Geordan Murphy are on the coaching staff will return to base and reassess, especially as the Exiles win comes on the back of a record Premiership defeat for the Tigers last week by Bath.

Mark McCall’s side Saracens had better fortune. The former Irish centre’s team overwhelmed Sale Sharks 40-19 to hold on to their unbeaten record and return to the summit of the table. Charlie Ingall, Sales Irish winger was not in the starting squad.

London Welsh went down to their fourth defeat of the year. Although they have three Irish players registered Shane Cahill, James Stanford and Paul Rowley, only Cahill was included in the squad, starting on the bench in their 10-46 defeat by former Irish outhalf David Humphrey’s new club, Gloucester.

Michael Keating also started on the wing for the winning Rotherham side with backrow Willie Ryan on the bench.

Eoghan Grace lined-out at blindside for Plymouth Albion with scrumhalf Ruairí Cushion on the bench in their 22-31 loss to Bedford, while Worcester beat Nottingham 55-16, lock Darren O’Shea getting the better of fellow Irishman and prop Conor Carey of Nottingham’s frontrow.