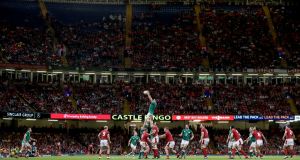 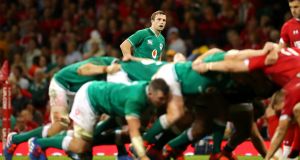 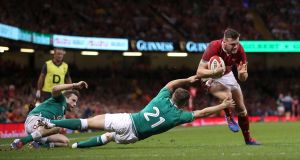 The quality of Ireland’s defence disappeared in the last 20 minutes. 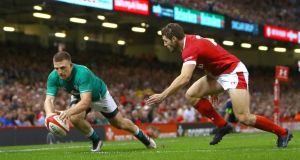 Ireland’s Andrew Conway goes over for a try that was disallowed for a forward pass. Photograph: James Crombie/Inpho

Ireland deserved their 22-17 victory based on the first 60-minutes of the World Cup warm-up match at the Principality stadium.

But head coach Joe Schmidt will be concerned at the manner in which the intensity and physicality tapered off in the final 20 minutes, allowing an experimental Wales team a shot at nicking the result.

Will Addison and Andrew Conway offered very persuasive arguments as to why they should be on the plane to Japan, as did Dave Kilcoyne, who had a thunderous game.

Bundee Aki produced an exceptional performance, while there was much to admire in some of Jack Carty’s attacking play, Iain Henderson’s work-rate was voracious while James Ryan, in his first outing of the season, emphatically proved that he is a remarkable rugby player.

Andrew Porter and Luke McGrath made standout contributions off the bench but overall fresh legs and minds didn’t have a galvanising effect in those final 20 minutes.

There’s no doubt that Rhys Patchell made a big difference to Wales attacking shape when introduced as a half-time replacement but he was given too much latitude by a tiring Ireland.

After last week’s shenanigans against England, the lineout functioned smoothly, with Ireland winning six of their seven set-pieces. The only one that went astray was when Aaron Shingler picked off Niall Scannell’s slightly flat throw intended for Peter O’Mahony.

Ireland simplified the calls with three of the six thrown to James Ryan standing at two in the lineout and another was a trick play; quickly thrown to prop Dave Kilcoyne at the front.

Scannell did well, while Rory Best hit Henderson at four with his first throw. It should be noted too, that Ireland’s captain made 12 tackles in his 28-minutes on the pitch - more than any Welsh player and the second highest on the Irish team.

The visitors didn’t gamble on going to the tail, preferring the safety of the front at the lineout.

It won’t suffice all the time but in the context of this match it worked out reasonably well. The real test will come when there’s a requirement for quick ball off the top at the tail.

This was a huge strength for Ireland over the 80 minutes as they forced Wales to concede six penalties, a penalty try and also saw the home side reduced to 14 players when replacement tighthead Leo Brown was yellow carded.

Munster props Kilcoyne and John Ryan put their opponents under pressure and Andrew Porter, covering loosehead for the first time since 2016, ensured that premium standard never waned, as did Tadhg Furlong on his arrival.

The scrum is not just about the props and the Irish pack worked well as an eight to maximise this advantage.

Wales had a debutant in the 21-year-old loosehead Rhys Carre while replacement tighthead Brown quickly fell foul of referee Romain Poite, just as his predecessor in the role Samson Lee had. Five of the first nine penalties that Wales conceded were at the scrum.

A case for the defence

Andy Farrell will be happier with a completion rate of 91 per cent in terms of the tackling statistics but a little less so with the two tries that Wales scored, albeit they were conceded by a tiring Irish side and as result of sustained Welsh pressure on the Irish line, rather than first phase.

Some of Ireland’s goal-line defence was excellent and in general terms, the line-speed and aggression in the opening 60 minutes ensured the home side were not only well-shackled but driven backwards and forced into errors.

That quality disappeared in the last 20 as tired minds and legs took over and the line-speed dropped appreciably.

When that is missing, particularly against physically big sides, Ireland look vulnerable and it is something they will look to take into and seek to improve next week when Wales are likely to come to Dublin with closer to a first choice team.

Ireland’s angles in attack, the lines of running and the offloading were very good at times particularly in the first half and exemplified in the build-up to Jacob Stockdale’s first try.

There was some good variety to the point of attack that kept Wales guessing. The Welsh press in defence managed to isolate Jack Carty on one or two occasions but his teammates hustled hard to rescue the situation.

A minor cavil will be Ireland’s failure to convert pressure into a try when they got within five metres of the Welsh line. Those are the Willy Wonka tickets of international rugby.

Speaking of golden tickets, Addison, Conway, Kilcoyne have edged closer to the plane for Japan following their respective performances.