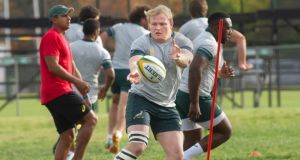 “Adriaan’s leadership qualities are impressive and well-established and he has the respect of his team-mates on and off the field,” Coetzee said in an SA Rugby statement.

“Adriaan has always fulfilled a leadership role, wherever he played, since coming through the junior national structures,” said Coetzee.

“He has shared the vice-captaincy role with Bismarck du Plessis for the Springboks and is also a former Cheetahs skipper and current Bulls captain. I have been impressed in my interactions with him and I have the utmost faith in him.”

Strauss has played 54 Tests since making his debut in 2008 and now looks to have claimed the regular hooker’s berth from Du Plessis, the player he has shared the number two jersey with since the retirement of former captain John Smit in 2011.

“I am very grateful to the coach for entrusting me with this enormous responsibility,” Strauss said. “I am incredibly humbled by this huge honour and also excited about the role.”

Coetzee named nine uncapped players in a 31-man squad on Saturday. The coach sprung a surprise with his selection of uncapped French-based prop Steven Kitshoff, who had been earmarked for a possible Test career with France after qualifying on a residency basis.