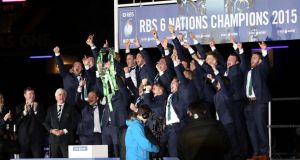 There will be no live coverage on terrestrial television of at least three of Ireland’s Rugby World Cup warm-up matches following Sky Sports announcement that they have successfully negotiated exclusive live broadcast rights to screen the matches against Scotland and Wales at the Aviva stadium in August.

Sky already possess the live rights to England matches outside of the Six Nations Championship so they will be screening the action when Joe Schmidt’s Irish side travel to Twickenham on Saturday, September 5th for their final match before the global tournament begins.

RTE will show a one-hour highlights package of Ireland’s two home games later on the night of the matches and are optimistic that they will be able to negotiate a similar arrangement for the away matches against Wales at the Millennium stadium – this is the only one of Ireland’s four warm-up games for which the television rights have yet to be confirmed – and England.

The announcement comes at a time when Minister for Communications Alex White has said there is a strong case for keeping the Six Nations Championship free-to-air for Irish television viewers. The Minster is contemplating adding Ireland’s home matches in the Six Nations to a list of events that includes the GAA All Ireland finals in hurling and football that must be accessible free of charge to viewers.

White contends that the Six Nations has a strong cultural significance for Irish people. He intends to consult a number of broadcasters including RTE, TG4, UTV and TV3 as well as well as Irish rugby’s governing body, the IRFU; the latter would oppose any government interference in selling the television rights.

Ireland plays four matches – not including a game against the Barbarians at Thomond Park (Thursday, May 28th) – in their World Cup warm-up programme, starting with a trip to the Millennium stadium where they face Wales on Saturday, August 8th.