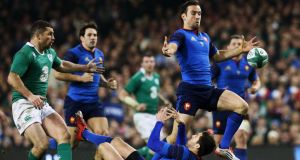 Morgan Parra starts for France, after bringing them back into contention off the bench against Ireland. Photograph: Brian Lawless/PA Wire

Philippe Saint-André was this week eulogising France scrumhalf Morgan Parra, admiring the tactical nous of a player who, at 26, is in his prime. Why then, a reporter asked the head coach of Les Bleus, had three other players worn the nine jersey since Parra’s last start in Australia nine months ago?

“What is the plan, Philippe?” a headline the following day asked, looking towards Saturday’s match against Wales in Paris. Saint-André had announced five changes, two enforced, from the side that lost in Dublin, a game that looked to have been beyond France until Parra replaced Rory Kockott.

The coach talked about making strategic choices such as the change of emphasis at scrumhalf – Kockott was injured but would have been dropped – and the relegation of the centre Mathieu Bastareaud to the bench, with Rémi Lamerat partnering Wesley Fofana in midfield under orders to create.

Secondrow Pascal Papé, has appealed against the 10-week suspension he received for his challenge on Jamie Heaslip, on the grounds it was “excessive and disproportionate”, according to a Six Nations statement. The hearing will be held in London next week.

Saint-André, perhaps conscious of how England had broken down Wales’s defence in Cardiff this month, does not see brute force as the way of delivering a first victory since 2011 over the men in red, who were vulnerable on the opening night when attackers looked to find ways around the rush defence rather than through it.

Wales have said they expect France to be more adventurous but a feature of the Saint-André era is that they have not often played with confidence never mind élan. Their capitulation in Cardiff last year was not untypical and seven months before the World Cup they are still trying to find themselves.

A couple of weeks ago it was Wales who were under pressure but an away victory buys time and, if Warren Gatland’s side lacked fluency at Murrayfield, Wales are a momentum team in the Six Nations: as it builds they are harder to stop.

There was a time when they tended to save their worst for the French capital but they have a 50 per cent record at the Stade de France and are on the trail of a fourth successive victory over Les Bleus, something they last achieved in the 1950s.

Saint-André has told his players he expects them to communicate more during a match but direction has to come from the top. While Wales know where they are going France have been like a driver whose sat-nav speaks in a foreign language. It is time for them to turn it off and trust their homing instinct; otherwise defeat beckons. Guardian Service