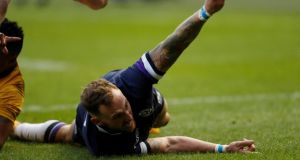 Last-minute call-up Byron McGuigan scored a try double as Scotland ran up a record 53-24 win over 14-man Australia at Murrayfield.

The Sale wing was handed a late starting slot when Stuart Hogg pulled up with a hip injury in the warm-up. But the loss of the British and Irish Lion did not slow Gregor Townsend’s impressive Dark Blues down as they rounded off their autumn series with eight tries and their biggest ever points total against one of the southern hemisphere’s big three.

The Wallabies had hit back with Tevita Kuridrani’s double and touchdowns from Kurtley Beale and Lopeti Timani but, once they had prop Sekope Kepu sent off for a dangerous barge on Hamish Watson, the Scots simply ran the legs off Michael Cheika’s team.

Some ropy handling cost the Scots the chance to make an immediate mark but they had McGuigan’s football skills to thank for the opening try on 17 minutes. Having fallen behind to a Finn Russell penalty, the tourists were struggling to cope with the hosts’ dynamism and intensity.

And when Bernard Foley threw a loose pass inside, McGuigan made him pay. The Namibia-born 28-year-old produced an exquisite first touch as he booted the ball towards the goal-line. An awkward bounce almost foiled him but McGuigan kept his nerve and even dribbled round Reece Hodge on the line before touching down.

Australia got the break they were looking for when referee Pascal Gauzere ruled Sean McMahon’s knock-on had come off his head. When the Scots hesitated, their visitors did not hang about, with Foley slotting Kuridrani through to score on 34 minutes with a cute grubber before adding the conversion.

The same pair combined three minutes later as Foley made the most of Tommy Seymour’s spill before popping off to Kuridrani to finish. This time Foley’s conversion was off-target.

But there was further drama in the final minute of the half as Kepu saw red for a shoulder barge into Watson’s face. With the Wallabies still trying to re-adjust, Price pounced, wriggling into space before diving over to put the Scots back in command at the break, with Russell adding the extras.

The tries continued to flow back and forth as they action resumed, with first Beale squeezing over for Australia three minutes in before Maitland responded almost immediately with a stunning 40-yard solo effort.

But the Australians were tiring quickly and found themselves opened up again on 49 minutes as Gray was allowed to canter over from close range. Russell’s conversion put them 12 points ahead and from then on there was no catching them.

With the Wallabies gasping for air, Russell caught them out again with a quick tap penalty before laying off to Jones to race in for yet another score. McGuigan scored his second on the hour mark as Townsend’s relentless troops refused to take their foot off the gas.

Timani did muscle over for a late consolation effort, converted by Foley, but Scotland came roaring back again with Barclay and McInally both barging over in the final stages. Russell booted both conversions to seal a magnificent victory.