Sam Whitelock and Brodie Retallick return for All Blacks 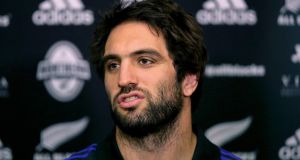 Sam Whitelock returns for the All Blacks on Saturday. Photograph: Inpho/Donall Farmer

First choice locks Sam Whitelock and Brodie Retallick have returned from injury and been named in a beefed-up All Blacks side to face Ireland in Dublin on Saturday.

Both missed the 40-29 loss to Joe Schmidt’s side in Chicago two weeks ago, where their presence in contact and the lineout was sorely missed as Ireland recorded their first win over the All Blacks in 111 years.

Regular blindside flanker Jerome Kaino, who played as lock in that loss at Soldier Field, had been expected to slot back into the number six jersey for the match but was ruled out with a calf strain.

Liam Squire will instead link with captain Kieran Read and openside flanker Sam Cane in the loose forwards in what many would consider close to coach Steve Hansen’s strongest side on the end of year tour.

“As expected, there is huge excitement and anticipation within our squad ahead of this weekend’s test against the Irish,” Hansen said in a statement.

“While there was obvious disappointment at the loss in Chicago, disappointment doesn’t win test matches - it’s about having great preparation and attitude, and delivering on the day.

World Player of the Year Beauden Barrett returns to the number 10 jersey and links again with scrumhalf Aaron Smith, who looked rusty in Chicago after missing the previous two games while sanctioned for an off-field incident.

Malakai Fekitoa and Anton Lienert-Brown retained their starting roles in the midfield following last week’s 68-10 win in Rome against Italy, while Julian Savea returns on the left wing having been rested last week.

Israel Dagg, who missed the Chicago game, returns on the right wing and will provide a safe pair of hands under the high ball that Ireland used to great effect at Soldier Field as they peppered the All Blacks’ back three.

“We know the challenge we face from Ireland will again be massive and ...they’ll be full of confidence and committed to delivering on their home patch,” Hansen added.

“So we will have to take a massive step up, to get the performance we are looking for.”