An insight into Johnny Sexton from those who know him best. Video: Three Ireland 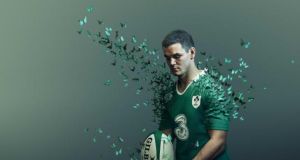 Despite already being amongst the shortlisted five players for the 2014 IRB world player of the year award, Sexton still has another gear or two within him according to his old Irish team mate and current coach at Racing Metro.

“Johnny the nerd, Johnny the perfectionist, there’s times you slip into his car and you turn on the radio and he has French lessons on the radio, that’s what your dealing with,” says O’Gara who is talking in the latest short film by Irish rugby team sponsors Three which focuses on Sexton’s rise through the schools’ rugby system with St. Mary’s College to being the international and Lions’ outhalf.

Also featured in the mini-documentary is Sexton’s school’s coach Richie Hughes, and godfather Billy Keane; the son of Irish playwright John B. Keane.

O’Gara, who was himself capped 128 times by Ireland, has a particularly interesting relationship with Sexton of course having been ousted by the younger Leinster man for the Irish number 10 jersey, before becoming great friends after pairing up in Paris.

“Johnny is an exceptional outhalf. He prepares really well, he doesn’t leave anything to chance on a Saturday. That’s what we’ve seen and that’s what you’ve got to do to be the best. He’s just so driven to succeed.

“I also think there’s more in the tank, I think we’ll see him in the next two to three years hit a new level.”

Ireland captain Paul O’Connell, next up in the three part series which has already featured Connacht centre Robbie Henshaw, and now Sexton, adds that “Johnny is the most ridiculous competitor you have ever seen, with an unbelievable work ethic. I know my job pretty well on the field, but Johnny knows where the other 14 players on the pitch should be at any one time.

“He’s the standard bearer in everything for us at the moment.”