‘That’s just him as a leader. It shows his role in the team is unbelievable’

Highlights from the press conference from the Irish and the Australian camps. Video: Daniel O'Connor 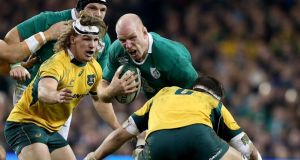 Will Genia and Quade Cooper were on as well. The Wallaby halfbacks ignited a relentless probing of Ireland’s defence. Kurtley Beale also bounced into the fray. Matt Toomua was sublime.

Four play-makers and so much power, a repeat of the All Black ending last November seemed inevitable. Flawless with ball in hand all day, a fourth Australia try seemed imminent.

The 77th minute felt like the moment of doom. Adam Ashley-Cooper attacked Robbie Henshaw’s corridor – as they had done all day – only to be met by a gang tackle from Jonathan Sexton, Rob Kearney and Simon Zebo. The trio ensured Ireland’s big pup wasn’t exposed.

Kearney and Sexton concussed each other in the process. Genia immediately went the short side but Zebo leaped up to make his tenth tackle.

Ashley-Cooper played scrumhalf to launch Skelton again but Foley atoned by latching onto the man mountain’s ankle. Down goes Skelton.

Genia to Cooper, who danced across midfield only for Ian Madigan to clear after Tetra Faulkner’s fumble.

Instead of touch Madigan’s kick found Henry Speight. This was the moment. Genia and Cooper probed and probed but an uncharacteristic Michael Hooper fumble allowed Foley to find Henshaw whose booming kick brought a lineout just outside the Wallaby 22.

Relief, glorious relief as Kearney and Sexton were helped off. As Gordon D’Arcy was earlier.

“I don’t think I made too many errors, I stayed connected with Gordon D’Arcy and my wingers, we shut them down pretty well. They never really looked like breaking us. We scrambled well in defence and the work Les Kiss did for us during the week worked out.”

The 13 men survived. Mike Ross went down (in dire need of oxygen). He got up as reinforcements – Eoin Reddan and Felix Jones – arrived. Murray effectively went to outhalf.

After 78 minutes Cooper and Genia probed and probed.

Then O’Connell blotted out the sun. 108 kilograms of Australian muscle came thundering out of their territory.

The Ireland captain embraced Ben McCalman with a greater ferocity and superior will, driving the number eight back from whence he came.

“That’s just him as a leader. It shows his role in the team is unbelievable,” said Henshaw. “That just gave everyone a lift when we were blowing hard and trying to go through the phases of their attack.”

What happened under the posts when Australia went 20-17 ahead?

“Paul just said we need to get together now, dig in as a team, retain the ball, put them under pressure and try and play in their zones. Just try and stay focused on winning as many moments as we can.”

Skelton again. O’Mahony again – 17 tackles from the flanker who played like a crossbreed of Denis Leamy and David Wallace. Beale made the next burst. Backwards. O’Connell again as he held the gold wave at bay.

“That just showed Paul stepping up and leading the line.They were win tackles that shifted the momentum our way. We got a turnover off the back of that,” said Henshaw.

It ended with Ashley Cooper being stripped by Bowe and Madigan. That was the game. That and the Mike Ross scrum when he squeezed James Slipper into submission. That and Sexton’s six penalties from seven attempts. That and the winger tries – thrilling speed from Zebo and the guile of Bowe.

“It was a tough task but I am glad we passed the test.”