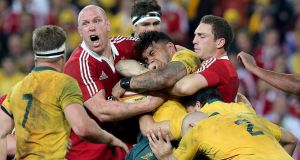 Paul O’Connell has been ruled out of the Lions’ tour to Australia with broken arm. Photograph: Dan Sheridan/Inpho

Paul O’Connell has been ruled out of the rest of the Lions’ tour to Australia because of a fracture to his right forearm.

The 33-year-old Irishman, who captained the Lions on their last tour to South Africa in 2009, sustained the injury in the 23-21 victory in the first Test in Brisbane last Saturday.

“Paul O’Connell ruled out of test series with undisplaced fracture of lower right arm,” read a tweet on the Lions feed on Monday.

The injury will be a particular blow to the Munster man, who came through a long period on the sidelines with groin and back injuries before returning to action in April to secure his place on a third Lions tour.

Arguably the Lions’ most influential forward, O’Connell had been an integral part of head coach Warren Gatland’s plans as they head to Melbourne 1-0 up.

England forward Geoff Parling, who is due to skipper the Lions in tomorrow’s game against the Melbourne Rebels, would be the obvious replacement.

Ireland prop Tom Court, currently in his home city of Brisbane, will join the squad today as cover for Alex Corbisiero, who has a tight calf muscle.

Court will go straight on to the Lions bench for tomorrow’s game.