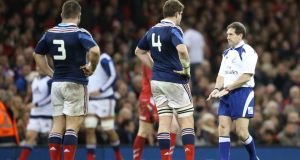 Rolland, who is fluent in French, had a busy evening overseeing his last Six Nations match before retirement – issuing three yellow cards as Wales thrashed France 27-6.

Toulouse number eight Picamoles appears to have paid for sarcastically applauding Rolland after being sinbinned in the second half. But Papé also faced flak in France for addressing the match official using the informal, more familiar tu form rather than vous , which would be expected when talking to older people and those in positions of authority.

The Stade Francais lock often seemed hostile in his dealings with Rolland, particularly after Yoann Huget had a first-half try ruled out and when Sam Warburton crossed in the second half.


Attitude problem
During the latter conversation, when Papé claimed that there was an earlier knock on, Rolland was heard warning the French captain over the way he was talking to him.

“On Sunday, I talked to Pascal on the phone to discuss his attitude, which was wrong,” Saint-André told French rugby newspaper Midi Olympique .

“The two men know each other a long time, having met many times . . . He [Pepé] was in his role as captain but he made a mistake . . . In the next two Six Nations matches, Pascal will vous the referees.”

The behaviour of several French players infuriated the coaching staff, with Saint-André detailing his frustration in detail.

“It’s unacceptable to talk, to comment on or to applaud the decisions of a referee,” he told Midi Olympique . “It’s the essence of our sport even, to respect the referee. His decisions are part of the vagaries of a match. We keep repeating it in rugby schools and . . . When you’re an international rugby player, you don’t have the right to behave like that . . . I can assure you that in the future, the players of the French national team won’t behave like what we saw in the Millennium Stadium in Cardiff.”

In case there was any doubt, Saint-André said that the 30-man squad to face Scotland on March 8th in Edinburgh was not soley picked based on injuries and ability.

“We have made some changes to compensate for injuries and for the perceived weaknesses during the game in Cardiff. But also for certain attitudes on the pitch regarding the squad and the match officials that have no place in our sport.”


Missing Nyanga
The injuries are significant. Clermont Auvergne announced yesterday that centre Wesley Fofana will be out for three to four weeks with a fractured rib, meaning he is virtually certain to be absent for the visit of Ireland to Paris on March 15th.

Flanker Yannick Nyanga, one of France’s better performers this campaign, will also miss the Scotland game at the least.

The Castres duo Rémi Lamerat and Antonie Claassen replace Fofana and Picamoles, while Clermont scrumhalf Morgan Parra is included despite being sent off for headbutting Montpellier’s Rene Ranger at the weekend.

Parra is to face a league disciplinary commission on March 12th, with his red card raising further concerns about the discipline of France’s players.

Yoann Maestri and Rabah Slimani have received red cards in recent matches for France and Picamoles, Sébastien Vahaamahina, and Nicolas Mas have all been sinbinned in the last two.

Having conceded 16 penalties against Italy, France conceded 11 more against Wales. Saint-André said the issue was addressed by his irate forwards coach, Yannick Bru, on the way home from Cardiff.