Matt Williams: Scrum will be key and that should simply sadden us 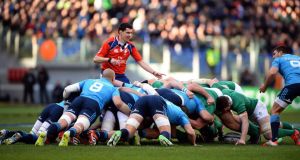 Players push in a scrum during the Six Nations match between Italy and Ireland at the Olympic Stadium in Rome. Photograph: Filippo Monteforte/AFP/Getty Images

I try not to speak negatively about rugby. It has given me so much and I have seen it give so generously to others.

There is a saying, that your best mates will tell you things about yourself that others are too frightened to mention.

So in that spirit, as a lover of rugby, I have to tell you that last week’s opening round of the Six Nations was the worst I can remember. It was mind-numbingly boring.

The lack of attacking intent from every team was appalling. The quality of passing was shocking and proficient backline play was non-existent. This generation of frontrower and their scrum coaches, have turned the scrum into an ugly, boring, time-wasting bastardisation of the game where the ball never reaches the centres.

Can everyone please stop cheering when a scrum penalty is awarded?

Yell, scream and boo, but not for the penalty. Do it, so we, the rugby people, tell the administrators that we are not going to take this rubbish anymore. The scrum has to change. It has reached the point where the scrum, the props and coaches are an embarrassment to the game.

This week we have been told that one of the highlights we should all be looking forward to will be when the French replacement prop, Vincent Debaty, comes off the bench, because he might give Jack McGrath “a twisting” in the scrum. Am I supposed to get excited about that?

The English attacking system is obviously designed as tribute for the World War one centenary. Wave after wave of forwards sacrificing themselves by running directly into Welsh tacklers. No sidestepping, no looking for space. The English were cut down in vast numbers, yet mindlessly they kept coming.

It was the Somme on a rugby field. Pointless trench warfare. And just like World War one, despite the horrific process, the English are delighted with the outcome.

Watching France play made me feel deeply sad. The French attack has always fired my imagination, with their attitude of running the ball. The French attacking philosophy of old was total, 15-man attack, with offloading, sidestepping and counter-attack. Gloriously creative backlines would swerve and dart from angle to angle. It was mesmerising to behold.

I am also reluctantly coming to the belief that the creative coaching skills required to organise proficient team attacking structures in French rugby coaching are now dead. Jean-Claude Skrela and Pierre Villepreux, two of my coaching heroes and the founders of modern French attack coaching, must be heartbroken.

Ireland should win this game easily (how times have changed that I can write such a statement).

Sexton will be rusty, but he is the best outhalf in the world. I expect a Serge Betsen-like defensive shooter going at Johnny today. Heaslip, O’Brien and Healy, off the bench, will make a massive difference. Lansdowne Road is home and the family are waiting with a warm welcome.

France have only one hope. Come out and run the ball.

Regrettably, I believe that at full-time penalties from scrums will have more bearing on the scoreboard than points from French attack.

Debaty off the bench wrestling our Jack and 20 box kicks from Murray maybe the highlights.