Without changing to a running game, any hope of defeating the top nations was a folly 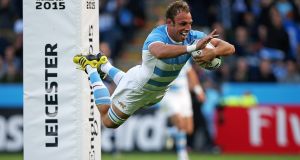 With the Pumas entering the Rugby Championship in 2012, it was the time for decisive leadership and action. Photo: Ben Hoskins/Getty Images

After the 2011 World Cup, the leading strategists in Argentina decided the Pumas had to change the way they were playing. They always played with passion, aggression and an accurate kicking game. However, against the best teams this philosophy had not succeeded and the Pumas strategists concluded it was not sustainable.

Without changing to a running game, any hope of defeating the top nations was a folly. With the Pumas entering the Rugby Championship in 2012, it was the time for decisive leadership and action.

The idea was simple. Keep all the great qualities from the past and introduce the skills required for a 15-man, ball-in-hand running game.

A skills programme including footwork, support play, offloading and passing out of contact was coached. These skills were coached to all representative age teams, the teams that competed in the Vodacom Cup in South Africa and the national team itself. The planned timeline for success was long. These things take time.

The Pumas inclusion in the Rugby Championship accelerated things. Not only were they playing the ‘Big Three’ from the southern hemisphere, but instead of assembling as a team for a few weeks a year, they came together for three months every season.

In the past two seasons their offloading game has shattered the well-organised defences of both the Springboks and the Wallabies. The Pumas also pushed New Zealand to the limit, in both the Championship and in this World Cup. A Puma victory against New Zealand some time in the immediate future is inevitable.

All of these recent performances had the usual Pumas trademarks of flint-hard defence, skilful forwards and awesome kicking. The joy of their play was the birth of a running game. It is exciting, entertaining and successful.

It must also be a hoot to play. The Pumas are playing rugby with smiles on their faces. What is more, they look like they were born to the freedom that running with the ball in hand produces.

I deeply believe that a national rugby team is at the zenith of its potency when the philosophy of their play represents the character of their nation.

Australian teams play at their best when they carry the ‘larrikin, devil-may-care’ attitude into their attack. The current New Zealand team are exceptionally potent because they are playing a no-nonsense, hard-nosed, accurate, attacking game that combines the honest, hard-working, Scottish-Kiwi heritage, with the aggression and creativity of the Maori culture.

Exuberance The Pumas have tapped into the joyous exuberance of their Latin nature, mixed with the exotic adventurous spirit of South America. They are a team truly born to run the ball.

At the end of the pool stages, the Pumas had scored 179 points, the most of any team at this World Cup.

Several years ago, when Argentina were in Dublin to play Ireland, I had cup of coffee with Felipe Contepomi. He asked to meet the night before the game. When I pointed out that meeting him the night before a match may be too much of an imposition, he laughingly dismissed my concern. “Get here at 8pm,” he said.

To meet a player at the team hotel the night before a big game is a taboo with most teams. Many feel it is disturbs the players’ mental preparation. But when I arrived, every Puma player was sitting at tables in the crowded foyer, chatting with their family and friends. Parents, brothers sisters and cousins were in abundance. It was like a local community club, everyone enjoying the occasion and happy in each other’s company.

Relaxed laughter and a tangible feeling of joy created an atmosphere unique to international teams the night before a match.

It was a sight to behold. Felipe, being the great gentlemen and wonderful rugby man he is, could see my surprise. He reminded me that the Pumas gathered for only a few days each year and in that time, the great joy and pride in wearing the famous blue and white jersey had to be passed onto the next generation. Just as it had been passed on to him by the earlier greats. The players were revelling in being a “Puma”.

It is obvious that this current group of Argentina players still hold high the values and culture handed to them by the past greats like Agustín Pichot, Mario Ledesma and Felipe himself.

The tactics the Pumas will use against Ireland tomorrow are a complete reversal of the "kick-a-thon" of the World Cup in 2007. The will run the ball.

Many in the Southern Hemisphere have the Pumas as favourites. No matter the result, Argentinian rugby is marching forward. With a team in next year’s Super Rugby competition and growing professionalism in their domestic competitions, the Pumas are a rugby power on the rise.

It may not be enough to overcome a spirited Irish team in the quarter-final, but Los Pumas have got a lot things right in recent years. It is impossible not to admire their intellect and courage in changing their attacking mindset.

Irish rugby should study the Pumas attacking plan intently. We could learn a great deal from an old enemy.