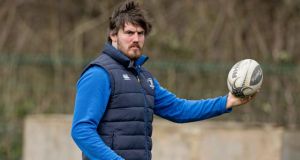 Australian secondrow Kane Douglas has been released from his contract with Leinster. Photograph: Morgan Treacy/Inpho

Kane Douglas’s all too brief stay with Leinster has come to an official end as the 26-year-old arrived in on Thursday to finalise terms with the Queensland Reds. Douglas still hopes to make Michael Cheika’s World Cup squad.

The 14-times capped Wallaby won a Super Rugby title with the NSW Waratahs in 2014, coached by Cheika, who reportedly played a part in his move to Dublin, but a number of factors led to Douglas leaving less than a year into a three-year contract.

It’s unclear how much of the €250,000 compensation Leinster sought from the Australian Rugby Union (ARU) was eventually paid.

“Leinster Rugby can confirm that a suitable agreement has been reached to release second row Kane Douglas from his contract with the province with immediate effect,” read a Leinster statement.

“Leinster Rugby would like to wish Kane and Jennarly the best of luck as they return home, and wish Kane well as he competes for World Cup selection with the Wallabies.”

Clearly, Cheika’s Wallaby regime is luring Australia’s best players back from Europe. Matt Giteau, Drew Mitchell and Dean Mumm have already returned to the fold while Toulon owner Mourad Boudjellal is threatening to sue the ARU after Quade Cooper’s change of mind about joining the richest club in the world.

Douglas clearly didn’t want to play for Leinster anymore but his case differs in that he cited family reasons for moving home.

“There are a few things going on at home that I need to be there for,” he said recently. “I didn’t think it would be this tough to be away from it all and I hope I can get back home real soon.”

Still, there are echoes of South African Steven Sykes’s short-lived move to Dublin in 2011.

Douglas appears to be fifth in the Wallabies secondrow pecking order behind Will Skelton, Rob Simmons, Mumm and James Horwill. Horwill came off the bench in victory over the Springboks last Saturday while Mumm, after returning from the Exeter Chiefs, provides cover in Argentina this weekend.

Douglas, having recovered from back surgery in April, comes into the reckoning for the upcoming All Blacks Tests.

His loss means new Leinster head coach Leo Cullen can recruit a foreign lock as soon as possible. However, Mike McCarthy did not make Ireland’s extended squad and Gavin Thornbury has graduated from the Academy to a full contract. The impressive Ross Molony has a year to run on his Academy deal, while Tom Denton is the other option.

Meanwhile, Cullen is also seeking a backs and attack coach. Former All Blacks outhalf Carlos Spencer has been mentioned but former Taranaki coach Leo Crowley looks favourite for the role once his time assisting Canada – his brother Kieran – is head coach, at the World Cup.

Girvan Dempsey is filling the role at present but he’s expected to remain in charge of the Academy and Leinster A.