Jacques Brunel and France turn to youth for visit of Scotland 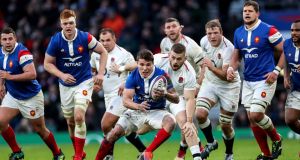 France head coach Jacques Brunel dropped scrumhalf Morgan Parra and outhalf Camille Lopez for Saturday’s Six Nations clash against Scotland but denied it had anything to do with their criticism of the staff following their Twickenham debacle.

Vice-captain Parra and Lopez pointed at the management’s share of responsibility in the 44-8 defeat against England on Februaty 10th when Les Bleus looked clueless on the field.

Brunel, however denied the duo has been sanctioned when he reshuffled his cards, making four changes to unveil a new-look, young team on Tuesday.

They have been replaced by the Toulouse pair of Antoine Dupont, 22, and the 19-year-old Romain Ntamack, who rarely plays at flyhalf with his club.

“I’m telling you it’s not the case (that they are sanctioned),” Brunel said. “Ask them, ask their team mates.”

“Given our performance (against England) we needed to change things, it’s a sporting choice.”

As a result, Yoann Huget shifts back to the wing after playing fullback in London and Gael Fickou is back at inside centre after playing at the wing.

Thomas Ramos, 23, will start at fullback and will be the main kicker in the absence of Parra and Lopez.

Ntamack, who started the opening game against Wales at centre, his usual club position, will have the playmaking responsibilities.

“We have been working on this with him,” Brunel assured after naming his team two days ahead of schedule.

Asked if he was not showing his cards too early, Brunel replied: “After seeing our performance against England, Scotland must be pretty confident anyway.”

Brunel however called on France to show their true colours at the Stade de France.

“We have to turn things around and show the real face of the France team,” he said.

France have lost eight of their last nine matches.

Scotland, who have not win in Paris since 1999, started their campaign with a victory against Italy before losing to champions Ireland.