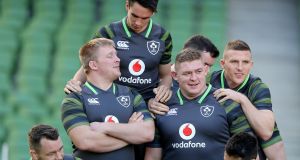 Ireland players get ready for the squad photograph after the Captain’s Run at the Aviva Stadium on Friday. Photograph: Dan Sheridan/Inpho

15 Rob Kearney
Age: 31
Height: 6’2
Weight: 95kg (14st 13lbs)
Caps: 76
Points: 67
Last played against Wales in the Six Nations Championship in March and will be hoping that his injury issues are at an end. His experience and composure will be vital in helping his two young wings.

14 Andrew Conway
Age: 26
Height: 5’11”
Weight: 90kg (14st 2lbs)
Caps: 3
Points: 0
He gets his chance after injury rules out Keith Earls, a reward for his form this season. He’s good in the air, possessive great balance, footwork and speed and is aggressive in the tackle.

13 Robbie Henshaw
Age: 24
Height: 6’2”
Weight: 103kg (16st 3lbs)
Caps: 29
Points: 10
It’s a reconstitution of a partnership from his Connacht days and the fact that he knows Aki’s game so well should help the understanding in midfield and he’ll have a big role to play vocally in directing the two wings: a standout player in either midfield role.

12 Bundee Aki
Age: 27
Height: 6’
Weight: 101kg (15st 12lbs)
Caps: 0
Points: 0
An eagerly anticipated debut for a player who gives everything for the jersey he wears. His power through the tackle, angles of running and ability to get his hands free make him a huge threat.

11 Jacob Stockdale
Age: 21
Height: 6’3”
Weight: 102kg (16st)
Caps: 2
Points: 5
Strong, quick and with a huge left boot, he’s balanced as a runner and has the footwork from his days as a centre that allow him to sidestep defenders as well as go through them.

10 Johnny Sexton
Age: 32
Height: 6’2”
Weight: 92kg (14st 6lbs)
Caps: 66
Points: 612
The fulcrum for Ireland’s attack, his ability to manage a Test match, vary the point of attack and the method, from wraparounds to cross-kicks, are central to Irish ambition, as is his placekicking.

9 Conor Murray
Age: 28
Height: 6’2”
Weight: 94kg (14st 11lbs)
Caps: 57
Points: 53
An outstanding player whose game has matured to a level that marks him as a key player in the team especially in decision making. He’s sharp on the fringes, box-kicks beautifully and defends resolutely.

1 Cian Healy
Age: 30
Height: 6’1”
Weight: 115kg (18st 1lb)
Caps: 70
Points: 15
He’s back to his best having recovered from a spate of issues arising from injuries. Footwork, power, speed and an ability to take tackles on his terms render him a prized carrier on top of his set piece functions.

2 Rory Best (capt)
Age: 35
Height: 5’11”
Weight: 105kg (16st 7lbs)
Caps: 104
Points: 40
Leads by actions rather than words and it makes it easy for his team-mates to follow. Such a ferocious competitor at ruck time and at times underappreciated in his link play. Ireland will need to be pinpoint accurate out of touch.

3 Tadhg Furlong
Age: 24
Height: 6’1”
Weight: 126kg (19st 11lbs)
Caps: 16
Points: 0
He’s going to face a proper arm wrestle at scrum time against Beast Mtawarira but every time the questions are asked he finds the answer on the pitch. A superb ball carrier.

4 Iain Henderson
Age: 25
Height: 6’6”
Weight: 117kg (18st 5lbs)
Caps: 32
Points: 25
A superb athlete, the consistent level of his performance and the impact he makes marks him as an important player. He uses his feet and body to create holes where none appear to exist.

5 Devin Toner
Age: 31
Height: 6’10”
Weight: 124kg (19st 7lbs)
Caps: 50
Points: 10
The South African lineout represents a proper challenge for Ireland’s master tactician in that aspect of the game. He’s often more effective on the gain-line as a secondary rather than primary carrier.

6 Peter O’Mahony
Age: 28
Height: 6’3”
Weight: 107kg (16st 11lbs)
Caps: 40
Points: 5
He’ll relish the primal physical nature of the contest in the collisions. He’s an excellent lineout operator on both sides of the ball and has the hands and pace to feel comfortable in the wider channels.

7 Seán O’Brien
Age: 30
Height: 6’2”
Weight: 108kg (17st)
Caps: 49
Points: 30
He has shaken a knock from earlier in the week, a huge boost for the team, as the Tullow man was one of the Lions outstanding performers in the drawn test series against the All Blacks. He’ll look to celebrate a half century of caps with a victory.

8 CJ Stander
Age: 27
Height: 6’1”
Weight: 114kg (17st 13lbs)
Caps: 15
Points: 30
One of Ireland’s primary ball carriers and hopefully someone who can generate the front foot ball that allows the rest of the team to play. A real threat if Ireland get into the green zone as coaches might say.