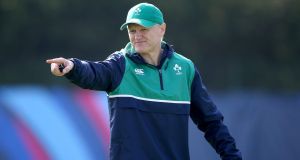 Ireland coach Joe Schmidt: “Unless Ireland can find a running game both Argentina and New Zealand seem to be a league above.” Photograph: Dan Sheridan/Inpho

By the bend in his nose and the fading scar under his now bushy eyebrows, I would guess that, in his day, he was an inside centre. He did not have the “cauliflower ear” trademark of a backrow forward. So maybe 40 years ago, he would have been a tough No 12.

It was outside the supermarket last Monday, the morning after Ireland had scraped home over Italy. There were no “beg your pardons”. He looked up, recognised me and said it straight. “We have not got a chance have we?” He didn’t wait for an answer.

“Keith Earls aside, we can’t break a line to score a try,” he argued. “If we can’t take Italy apart, how are we going to take on France, then New Zealand, or if we are lucky Argentina?” He was now on a roll.

“In Joe we trust!” He spat out the words. “What sort of ‘shiteology’ is that, to build a World Cup campaign on? He’s a good coach, we all know that, but it seems like he is being held up as the head of a strange cult and we are all supposed to be under his spell. We’re having ourselves on.”

He rolled his eyes. “Anyway, lucky it’s only a game,” he chuckled. “By the way you might tell everyone the truth.” He got back in his car and was gone. The problem with old rugby guys is, mostly, they are right.

The finest of all is our captain. Paul O’Connell is an icon, and an all time great. He has always conducted himself with great dignity, skill, courage, humour and grace.

Joe Schmidt and his staff are also highly intelligent, successful and admirable men. The country, quite rightly holds them in the highest esteem. As a coach, I regard Joe as one of the world’s best.

But here is my issue. As wonderful and as admirable as the entire set-up is, like us all, they are not perfect. Honest debate, in a mature manner, regarding issues surrounding the team, is actively being discouraged. More than that, anyone who challenges the ‘cult’ is rounded on.

That’s not healthy for rugby and it’s keeping the wonderful Irish rugby public, who support the team so magnificently, in the dark. What makes this veil of silence even more immature is that the obvious errors in the build up to this World Cup are not being addressed.

Predictable Irish attacking structures where players are running across field are being disguised as so called “power plays”. This term alone seems to have mesmerised the Irish rugby community into a false sense of security. In reality they are simply well organised three phase attacking systems. These are not original, nor are they being executed in a manner that is likely to break down well organised defensive systems.

However, in this current cult-like atmosphere, if anyone has the temerity to suggest that things in the Irish team are anything but tickety-boo brilliant, you are accused of being unpatriotic.

Now as far as I know, saying our centres are not breaking tackles is not quite the same as selling secrets to the Russians. Nor is it attacking the man in the jersey, it is a rugby observation.

I can’t quite put my finger on the reasons behind this situation. Maybe the country is just longing to have something good and wholesome, like the Irish rugby team, to cheer about. Maybe amongst the pain of austerity, the brutal truth that Ireland may not be good enough in this World Cup is not a welcome topic.

No matter the reason, at this World Cup, the pinnacle of world rugby, you have to score tries. With rugby returning to the great beauty of the running game, Ireland have been caught on the hop.

In Ireland’s last eight games against tier one teams – from the 2014 November Internationals, the Six Nations and this World Cup – Ireland have only scored more than two tries once. That was the win over Scotland in the final game of the last Six Nations. Winning two Six Nations Championships was a fantastic achievement, but in playing a conservative defensive style, Joe may have not prepared a game plan capable of defeating any of the four Southern Hemisphere teams.

France may have too much for Ireland but it will be close. Either way, unless Ireland can find a running game both Argentina and New Zealand seem to be a league above. That is the truth and the truth is never treason.