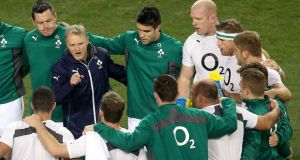 Joe Schmidt talks to his team in November. This Ireland team must find a measure of consistency. Photograph: Ryan Byrne/Inpho

Including the Scots’ famous victory over Ireland at Croke Park, in 2010, the last four Six Nations games between these two nations have been shared, two wins apiece. If we include the 2011 RWC warm-up game, which the Scots won, the ledger is Scotland three and Ireland two.

To put it simply, Ireland find the Scots awkward to play and difficult to defeat.

In recent seasons Scotland has brought great aggression and commitment to their fixture with Ireland. The Scots play with real purpose, particularly at the breakdown. Here they disrupt Ireland and denying them fast ruck ball. This has lead to a disjointed Irish attack and a lot of frustrated men in green. Scotland’s disruption of Ireland’s attacking rhythm manifests itself in Ireland losing discipline and giving away penalties.

Their attacking system of passing to the flanks then running has been effective against Ireland’s defensive system which remains vulnerable out wide.

The key for Scotland is that playing Ireland holds no fear. Playing fellow Celts is as natural as fighting your brother for the TV remote. There is no fear, just an opportunity for real fun and the competitive nature of Celts to emerge.

Mindset drives performance and the Scots’ mindset is one of confidence based on past performances.

Regrettably, when Scotland play other leading Six Nations countries their mindset changes. Against Wales, England and France their mindset is defensive and not attacking. Where there is confidence against Ireland, the Scots have doubt against these opponents. In these matches the Scots lose the belief that they can win.

The result will swing on which Ireland team turns up at the Aviva.

The soft, disinterested, disorganised Ireland that were so embarrassingly poor against Australia. Or the magnificently aggressive and abrasive Ireland, that were accurate in their set plays, support and off loading against New Zealand.

There is one word that defines Joe Schmidt’s mission with the Irish national team.

If he is to be a successful national coach, consistency must be his mantra. Joe must repeat this message nights and day. It must be hammered it into the soul of this team.

With the notable exception of the Grand Slam victory of 2009, when Ireland were gloriously consistent and allowed us all to observe their greatness, a lack of consistency has condemned Ireland to the margins of international tournaments. Ireland’s failure on the world stage is because consistently high performing teams are rewarded in the Six Nations and the World Cup.

While the Irish provincial teams have reaped the rewards of consistency in the Heineken Cup, it has not crossed over to the national team. Apart from 2009, we have to look back to Ciarán Fitzgerald’s great teams from the 1980s for consistency in a green jersey.


False dawns
There have been many false dawns for the hope of repeated success.

In the last round of the 2011 Six Nations, despite playing poorly the entire championship, Ireland had a magnificent victory against England in Dublin, denying them the Grand Slam. I dared to hope for the 2011 RWC in New Zealand.

In the lead-up games to RWC 2011, that included a loss to Scotland at Murrayfield, and in the opening pool matches, Ireland were poor.

Then Ireland defeated Australia at Eden Park. It was a great victory. Ireland’s greatest in a World Cup, but this time I doubted. I did not join the chorus claiming it to be the greatest victory of all time. I wanted to see what the quarter-final would bring. I wanted consistently high performances. History shows that in the quarter final, Ireland performed below expectations and lost to a young and consistently improving Wales.

The swing in Irish performance from excellence to mediocrity repeated itself.

There is no doubting this team’s talent. There is no argument about the effort and the physical commitment of the players. However when we see the pendulum of performance swing so far between the Australia and New Zealand matches, I have to question the players’ emotional and mental preparation for the matches.

Floating somewhere in the ether around this Irish team, there is the X-factor to consistency. A mixture of leadership, relaxation, joy, passion and intelligent game management, will empower them to repeated high quality performances.

It is not only Joe Schmidt’s task to bring forth the X-factor. It is the responsibility of every player to dedicate himself to go beyond his past performances.


Emotionally committed
Winning is not easy. If it was easy, everyone would do it. Winning international rugby tournaments is extremely difficult. It requires the collective mindset of the team to remain emotionally committed for the duration of the championship for success to be gained. Against New Zealand we faulted for only a minute. The margins are that tight.

On Sunday at full-time, when the referee calls “no side”, we will understand if this is to be a championship full of possibility, where Ireland can once again show the world their undeniable talent. Or will Ireland’s inconsistency allow Scotland to fight and claw their way to an unlikely but gutsy victory?

I am like Joe Schmidt, I don’t know which Ireland will show up. If the Ireland who played New Zealand runs out onto the Aviva and if Joe can get them to keep fronting up for the five matches, nothing is impossible.