How big has become beautiful in modern rugby 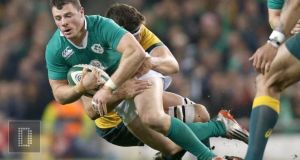 Big blokes, these rugby men. Irish sides are not renowned as behemoths of the rugby world but Joe Schmidt’s side of today still dwarfs those of 30 years ago. Watching tape of matches even from the early 1990s, never mind the ’80s or beforehand, and the slenderness of those on the field is quite clear compared to the muscled specimens that will be on show over the coming Six Nations weekends. Rugby players are big. And they’re getting bigger.

There have been exceptions, of course. Ireland’s 2004 Triple Crown winners featured a halfback pairing of Ronan O’Gara and Peter Stringer who weighed the same as Paul Dean and Michael Bradley in 1985.

But on the whole the trend is clear.

Ireland’s average forward in 2014 weighed 16 per cent more than his 1980 counterpart, while the backs, even including (in international terms) a relatively small pairing in Brian O’Driscoll and Gordon D’Arcy, were on average 22 per cent heavier than those 34 years previously.

On January 19th, 1980, Ireland would lose 24-9 to Bill Beaumont’s England. The referee that day was Welshman Corris Thomas, who for the last 17 years has been a game analyst.

Fourteen months previously Thomas had refereed Munster’s famous victory over the All Blacks and says that in the years since those games took place the structure of a rugby match has changed utterly.

That vast increase in contact outside the setpiece demands that teams have several backs with a physique capable of carrying into contact and competing at the breakdown, both in terms of dishing out and absorbing the hits.

“If you look back at the way rugby was played 25 years ago, you had providers of the ball and distributors of the ball,” said Thomas. “So you had all these setpieces – 80 or 90 of them – where the forwards did all their work.

“The ball would then come out to the three quarters who, if they couldn’t beat their man, would either pass or kick. They wouldn’t take contact. So when you look at the sizes of players, their physical requirement was different from that which you see now.”

You don’t need to be a former international referee turned game analyst to notice the ever-growing physique of rugby players. But it’s not easy to get data that will prove useful for comparison across positions and eras that will stand up beyond the court of the high stool.

The accompanying graphic for this piece is based on data from match programmes gathered from a number of sources including Twickenham’s World Rugby Museum, the RFU’s contracted programme printer and Thomas himself.

While data collated for use in match programmes will perhaps not be medically precise, it can still be useful.

New Zealanders Ken Quarrie and Will Hopkins used data from similar sources when examining the size of New Zealand teams in selected Bledisloe Cup matches from 1972 to 2004. They showed the early years of rugby union’s professional era to be a step change in terms of player size, particularly in terms of mass. Weight increases were seen across the board, with a particular increase in the height of All Black backs.

While professionalism brought greater awareness and management of player nutrition and supplements, as well as the increased use of weight training, a less obvious impact of professionalism might have been the widening of the talent net.

Olds described “the mining of the source population for big players”, as well as the cycle of ever-increasing size required to gain a competitive edge.

When the game entered the “open” era in the second half of 1995, rugby’s overseers did more than simply allow rugby players to get paid; as the potential for reward increased, so too would the numbers willing to play.

Rugby’s journey towards bigger humans can be described as a process of natural selection to which professionalism provided an accelerator. The game’s changing structure is another key contributor, including the increase in the number of permitted substitutes.

To some observers an emphasis on size over skill is to the detriment of the game as a spectacle. Perhaps rugby’s lawmakers will provide a new direction, promoting creativity over contact. But to many a rugby coach’s Darwinian eye, big is beautiful.