Attacking Ireland under-20s to opt for pragmatism against formidable England 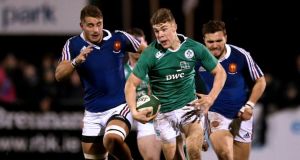 Garry Ringrose is one of the exciting talenst on the Irelanf under-20 team. Photograph: James Crombie/Inpho

Word of mouth is usually a good indicator of form and ability. That has been the case with this Irish Under 20 side who have won the first two matches with 11 tries, scoring 84 points.

Their opening up against France has been one of the more uplifting games played so far this season.

Coach Nigel Carolan has encouraged his young team to play what’s in front of them and if that means letting them off the leash then so be it.

It’s a refreshing attitude but be certain they will not go into tonight trying to run everything at an English defence that has shown itself to be robust and beefy. Like their senior counterparts, Ireland will play with pragmatism.

Carolan has made no changes to the side that beat Franceand they are fully expecting the physical challenge England will bring.

“If we can match them in the physical department, we hope to reproduce a similar performance like we did two weeks ago,” said Carolan this week.

Donnybrook is sure to match or surpass Dubarry Park with a substantial number of English fans also within walking distance from town if they wish to see the next generation. The 4G pitch, if the schools senior cup is any measure, may also provide quicker rugby even if it rains.

England have recalibrated after an opening loss to Wales and they ran in nine tries against Italy. But that really is no measure and this Ireland team is expected to provide them with as stiff a test as Wales did.

With some exciting emerging talent in Garry Ringrose, Billy Dardis and Ross Byrne in the backline, it will be a case of the forwards, as usual, supplying the platform.

England coach Jon Callard expects this to be his toughest match and has made six changes from the side that hit Italy for 61-0. The former England fullback has introduced a little more nous with Nick Tomkins and Aaron Morris bringing experience from the 2014 Junior World Cup into the backline.