Are France happy to lose to England to avoid the All Blacks? 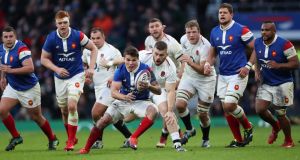 Rarely, if ever, have England been involved in a World Cup fixture which their opponents would secretly prefer to lose. France’s players and coaches will not shout it from the Imperial Palace rooftops but they know an English win in the Pool C contest on Saturday will offer Les Bleus a slightly enhanced chance of success in the knockout stages.

Not so much Le Crunch, then, and more L’Énigme. Finish second in Pool C and France will potentially be in line to face the familiar threat of Wales in the quarter-finals and avoid the half of the draw occupied by New Zealand. Beat England and, conversely, they may well have to defeat the Wallabies and the All Blacks on consecutive weekends merely to reach the final.

It all makes life slightly less straightforward than it would otherwise be for Eddie Jones’s squad. If France opt to field an under strength team, for example, might it not make some sense strategically to rest a couple of key men themselves?

Jones has already indicated he is contemplating a few changes and it is not hard to see why. Stick with the same starting XV having already qualified and he may have some cause for regret should injury subsequently strike and force him to pick a rusty replacement for a big knockout game. “We recognise we’re not going to play the same 23 from start to finish,” the scrum coach, Neal Hatley, said. “If someone hasn’t played for five weeks, you can’t just throw him in and say: ‘Right, off you go.’”

Among the fringe candidates who might benefit from a run-out are Mako Vunipola, Jack Nowell and Henry Slade, with Ellis Genge, Joe Launchbury, Mark Wilson and Joe Cokanasiga other possible candidates off the bench. Jones clearly needs to find an alternative to Billy Vunipola, who twisted an ankle in the 39-10 win against Argentina on Saturday, but there is a wider juggling act to consider as well.

In a perfect world, for example, Jones would prefer to be seeing more from two of his key playmakers, Owen Farrell and Ben Youngs. With the greater good in mind, might it be worth easing George Ford, perhaps England’s best player in their opening three games, on to the bench for this encounter, starting Farrell at 10 and pairing Slade and Manu Tuilagi in midfield? With Jonny May and Nowell on the wings, Anthony Watson at fullback and Cokanasiga on the bench, that would also keep Elliot Daly fresh for the bigger climbs ahead.

Or, alternatively, does the head coach simply say: “Play it again, Sam,” to the increasingly influential Sam Underhill and his backrow sidekick Tom Curry on the basis that if you want a job done well it pays to employ a busy man? England’s management were encouraged by the tireless Curry’s efforts as a stand-in No 8 in the second half against Argentina and continue to appreciate the enthusiasm Lewis Ludlam brings to the party.

Even more crucial, though, is that everyone keeps sight of this squad’s primary aim in Japan. Just four more wins and they will be hoisting the Webb Ellis Cup; now is not the time for unnecessary distractions.

“You get momentum from winning and we want to win all the games,” said Hatley, making clear the squad would much prefer to qualify first rather than second. “England are playing France, I can’t imagine anyone not taking that full out, 100mph seriously. We want to top the pool. There’s been no team who have ever won a World Cup having lost a pool game and that for us sets a precedent. France is a traditional enemy and we want to beat them.”

The players have a similar mindset; at this stage of a World Cup no one wants to risk someone else coming in and taking their shirt. The Saracens hooker Jamie George said: “I’m pretty sure I speak on behalf of everyone that we are all desperate to play in this game. It’s another opportunity to represent your country in a World Cup, which as we all know is very rare.”

May, scorer of 19 tries in 30 Tests in the three years since he first played for England under Jones, is equally keen to be involved, having already scored three tries against France in the Six Nations this year. “You feel it building all week,” the Leicester winger said. “We have done so much training that you feel ready to go off like a rocket at the weekend.” From England’s perspective, beating France is never a mixed blessing. - Guardian