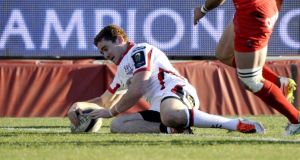 Paddy Jackson scores a try for Ulster against Toulon but was later forced off with an elbow injury. Photograph: Franck Pennant/Presseye/Inpho

There wasn’t a great deal to salvage from this wreckage for Ulster. They conceded a record total of points in Europe – beating the 56 Ulster coughed up at Wasps in the 1997/’98 season – while Paddy Jackson (dislocated elbow), Louis Ludik (ribs) and Stuart Olding (arm) joined the alarming injury list at the Kingspan Stadium.

With Ulster already short of fit backs, it meant Neil Doak was forced to deploy scrumhalves Paul Marshall and Michael Heaney to firefight where they could.

The visitors did manage to snaffle a try bonus at the Stade Felix Mayol, through two touchdowns from Michael McComish and tries from Jackson and Jared Payne, but it was scant consolation as Toulon secured top-spot in Pool 3 with eight tries.Steffon Armitage bagged a hat-trick and Leigh Halfpenny nailed nine of his 10 shots at goal, and there was little to suggest Toulon will trip up at the Scarlets in their quest for a home quarter-final.

Ulster have to lift themselves for the visit of Leicester Tigers on Saturday who are still chasing a quarter-final spot. “I’m not worried about the scoreline,” Ulster coach Neil Doak said.

“We needed everything to go our way but that’s by the by now and I’m just very proud of the players they can hold their heads high.

“We came here and got four tries and I thought the boys were outstanding in the effort they put in.

“People on the outside think it’s doom and gloom, but we were up against a star-studded side. We don’t have the resources they have and we’ve got to be realistic.

“But we want to compete at that level and I think we’re building to get there.”

The gulf in class was more of a chasm. Ulster put it up to their hosts until towards the end of the first half after Jackson and McComish had scored tries to narrow Toulon’s lead to just 13-10.

But two quick tries for the home side followed with Bryan Habana benefiting from what appeared to be a forward Mathieu Bastareaud pass, and then Bastareaud himself ending Ulster’s prospects. And from 27-10, the back-to-back champions turned on the afterburners.

After man-of-the-match Nicolas Sanchez got the game’s first try after just two minutes, with a Halfpenny penalty making it 10-0 seven minutes later, Ulster scored a cracking try from Jackson.

Halfpenny’s second penalty followed before McComish got over from a driving maul to make it 13-10, but Jackson again missed the extras. It stayed that way until just after the half hour when Habana and Bastareaud struck.

Martin Castrogiovanni was next in the 50th minute before Armitage and then Mamuka Gorgodze got over. Armitage then got his second before Ulster interrupted things with two late tries to get a bonus point. But normal service was resumed with the hat-trick from Armitage in the 78th minute.