Munster’s life in Europe on the line against Saracens 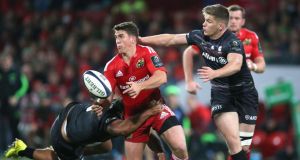 If it’s January in Europe then Munster have to be fighting for their lives. However, even by their standards, Munster are in a particularly tricky pickle, for rarely do they find their European lives on the line away from home in the penultimate pool game.

There is no shame attached in this case, with Munster’s group containing three semi-finalists from each of the last two seasons. Their bonus points from both defeats to Clermont have kept them alive, albeit by a thread.

This Munster team’s inconsistency infuriates Paul O’Connell, among others, but then again, their penchant for European fare is a strength and a weakness - witness their ability to up their performance for their big games against Leinster and the first meeting with Saracens this season.

Yet the loss of Conor Murray looks like a significant blow and Munster’s relatively lower strike rate is another concern. Tries tend to be harder work for them, with Saracens scoring 50 (and conceding 30) to Munster’s 37 (conceding 23). If opportunity knocks, Chris Ashton and David Strettle are particularly potent finishers.

Warzone at the gainline

With Denis Hurley picked in midfield, we can expect the gainline to be a warzone, all the more so with Brad Barritt restored alongside Marcelo Bosch. In keeping JJ Hanrahan as their ace in the hole, the chances are that Munster will create even less chances than they did in Clermont.

In any event, when recalling how they failed to maximise the creative spark Hanrahan gave them in the Marcel Michelin in the opening quarter, one suspects the need for Munster to take their opportunities here will be every bit as acute.

Saracens may not be the most creative side around, but they are vulture-like in the way they profit from the opposition’s mistakes and, indeed, score off turnovers or from broken play. They are at their happiest when soaking up their opponents’ pressure and then striking stealthily - witness their scarcely credible 46-6 win over Clermont in last season’s semi-final.

There have been signs that they’ve come down a notch this season, with Steve Borthwick’s retirement perhaps keenly felt and Owen Farrell troubled by injury. Yet they were only denied a fifth successive win last weekend after the TMO ruled out a fourth try, before James Hook kicked a winning 50-metre penalty for Gloucester.

Even then, it required two stunning tries by Gloucester to stay in touch after Saracens’ demonstrated their potency up front with three tries off their line-out maul. With Billy Vunipola back at number 8 and the big-hitting Jacques Burger, it will be a surprise if the Munster pack are as dominant as they were when the sides last met, and if they gain such ascendancy up front as they did in their Thomond Park win. Murray’s physicality will also be missed around the fringes.

Then again, as with the pool games two seasons ago and this season, Saracens-Munster games of late have been suffocatingly tight affairs, yielding just three tries in three meetings. Only one other game so far in the competition has had less line breaks than the four that occurred at Thomond Park, and one imagines that with so much at stake in a win-or-bust game for both teams that this will be even more of an arm-wrestle.

In what could well be a feisty affair, discipline and concentration will be important, as was the case in their first meeting, when Rhys Gill’s yellow card proved pivotal. That Romain Poite is the referee, and Munster have to adapt to the Allianz Park 4G pitch, adds to the discomfort.

Munster are well capable of extricating themselves from their latest corner, with a performance akin to the one they produced in beating Harlequins away in the quarter-finals two seasons ago.

It could well be that those losing bonus points against Clermont, not least when looking dead and buried in the Marcel Michelin until their late 10-point salvo, will come to matter significantly. Ian Keatley’s last-ditch drop goal to beat Sale away on the opening weekend, when coupled with Saracens’ failure to obtain an attacking bonus point at home to Sale, may also figure.

It has to be said, however, that, on this pitch, and with Murray missing, the odds are against them.