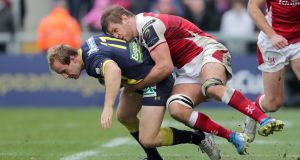 Ulster coach Les Kiss paid tribute to his team in the aftermath of a stunning 39-32 Champions Cup victory over Clermont Auvergne at the Kingspan stadium, while acknowledging an imperfect performance.

The French Top 14 leaders returned home for Sunday week’s repechage with two bonus points; the scored the final brace of tries in the game, to take their tally to four and ultimately close the gap on the scoreboard to seven points.

Given the lengthy injury list, Kiss was understandably pleased with the character his team displayed and also the calibre of the attacking play and decision making in general. There were aspects of the defending, particularly in the first half, offered a counterbalance to the positivity.

He explained: “From a performance perspective, (there were) a lot of good things (and that includes) the outcome. Parts of the process were a little bit disappointing; we let (Wesley) Fofana have too much room in that first half. A couple of missed tackles on (Peceli) Yato gave them momentum in the first half and they stayed in the game. I thought that was disappointing.

“In the second half we addressed it; I think we came out and turned up a lot better in that area. It was pleasing to say the least. The boys were prepared to back themselves and back their skill sets. That told in the end.”

Kiss agreed that Clermont taking home the two bonus points leads them in control of the pool ahead of the return game. “It certainly does. Look the last 20 minutes I wouldn’t have agreed with all of Wayne’s (Barnes) decisions in the penalties but that is what it is. We just weren’t good enough to stem that (flow).

“That’s why we are disappointed. The two points keeps them in control of the pool and we are going over to a cauldron that is very difficult to win in, in any circumstances.

“We have to address what we need to do to step up to that challenge and build on some of the really strong things that we produced today. Overall some positives to come out of it, particularly our backrow, I thought they were awesome. They really made them scrap for everything and kept the momentum we needed to in attack.”

The Ulster coach admitted that the depth of the squad will be tested. Players were nursing bumps and bruises and while there were no immediate injury concerns for those on duty, 24 hours would offer more clarity in that respect.

Kiss confirmed that Andrew Trimble, Craig Gilroy and Stuart Olding all of whom missed the match are rated no better than 50/50 for next week but the news looks a little more positive on Franco van der Merwe and Roger Wilson.