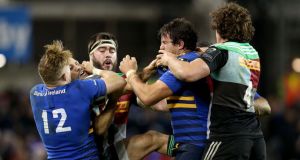 Ian Madigan and Dany Care have both been given warnings for an incident which occured late on in Leinster’s 14-13 Champions Cup victory over Harlequins at the Aviva Stadium, while ’Quins lock Charlie Matthews has been cited for alledgedly making contact with the eye area of Dominic Ryan

Ian Madigan has been issued with a warning from the citing commissioner following an incident with Danny Care in the closing stages of Leinster’s 14-13 European Champions Cup victory against Harlequins last Saturday.

Care has also been given a warning after the England and Ireland internationals came together in the 77th minute of a tense affair at the Aviva Stadium.

As Care’s leg was being held in the air by Leinster’s Mike McCarthy he threw the ball into the face of the secondrow, which prompted Madigan to drag the England scrumhalf to the floor, sparking a brief brawl.

Both players received warnings from referee Roman Poite but neither was sent off.

However, Harlequins lock Charlie Matthews has been cited for his involvement in the same incident which saw him sent to the sin bin for making contact with Dominic Ryan’s face off the ball.

Matthews is alleged to have made contact with the eye area of Leinster’s backrow and a hearing will take place in London on Wednesday.

If Madigan and Care receive two more sanctions – in the form of either warnings or yellow cards - throughout the rest of the 2014/15 competition they will be required to attend a disciplinary hearing.

Meanwhile, Leinster have confirmed that, while flanker Rhys Ruddock will be out for four to six weeks with a fractured arm, the injury was a clean break and he does not require surgery.

Gordan D’Arcy, Richardt Strauss and Dave Kearney are all training and available for selection for Friday’s Pro12 fixture against Connacht at the RDS.

However, despite Seán O’Brien and Cian Healy returning to the training pitch this week neither are ready to return to action as they recover from shoulder and hamstring injuries respectively.