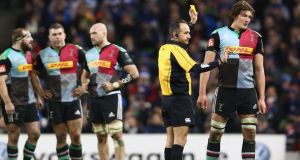 Matthews was sent to the sin bin by referee Romain Poite for an incident in which he appeared to make contact with the eye area of Leinster flanker Dominic Ryan in the closing stages of a fraught and ill-tempered encounter at the Aviva Stadium.

However a disciplinary committee judged Matthews, who pleaded not guilty to the offence, had not committed an act of foul play, following evidence from Ryan which stated he had not felt any contact with his eye area.

An EPCR statement read: “A citing complaint against Charlie Matthews of Harlequins, following an incident during his club’s European Rugby Champions Cup Round 4 match against Leinster Rugby on 13 December 2014, was dismissed at a disciplinary hearing in London yesterday evening (Wednesday, December 17).

“Matthews was cited by the match Citing Commissioner, Stefano Marrama (Italy), for allegedly making contact with the eye area of the Leinster wing forward, Dominic Ryan (No 7), in the 77th minute of the Pool 2 game at the Aviva Stadium in contravention of Law 10.4 (m). He was shown a yellow card following the incident by referee, Romain Poite (France).

“The independent Judicial Officer, Rod McKenzie (Scotland), studied footage of the incident, and heard evidence from Matthews, who pleaded not guilty to the alleged offence, from Harlequins Director of Rugby, Conor O’Shea, and from EPCR’s Disciplinary Officer.

“Following a review which also included evidence from Dominic Ryan in which he stated that he had not felt any contact with his eye area, the Judicial Officer was not satisfied that Matthews had committed an act of foul play and dismissed the citing complaint.”