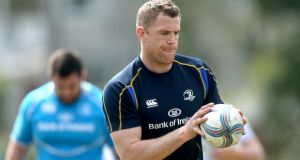 
The season of wounded soldiers continues. Both suffering from dodgy calves, an awfully annoying injury to remedy, the absence of Seán O’Brien and Gordon D’Arcy makes this afternoon’s visit of Biarritz more interesting than initially expected.

Granted, the men stepping into the breach, Shane Jennings and the wonderfully expressive Ian Madigan, should keep Leinster’s forward momentum on track.

But, still, the loss of such an influential duo matters. Particularly O’Brien. Over to Jamie Heaslip then. He is Europe’s top ball carrier this season, with 95 rumbles, it’s just that an O’Brien carry is so damaging, evidently to both himself and tacklers.

D’Arcy’s not done yet, but Madigan at second-five-eight could be a glimpse into the future. For Ireland that is, and probably Joe Schmidt too.

Playing at 12 frees the 24 year old to do what he does better than most; gliding over the gainline. It also allows him and Jonathan Sexton to blend their contrasting styles. No worries on defence either. Madigan put to ground 15 of the 16 Munster men he belted into a fortnight ago.

Today he must stare down the prototype of a suave, crash-ball merchant in Damien Traille. At least there’s another Blackrock chap prowling the midfield frontier.

Another interesting issue today is place-kicking. Leinster assistant coach Richie Murphy possibly had two wildly contrasting conversations with Madigan and Sexton this week. Possibly at the same time. Seniority prevails despite the former being on an amazing 20 from 20 Pro 12 kicking streak, although Sexton, on return from a foot injury, nailed his five shots at goal against Zebre.

Factor in Sexton’s imminent, Madigan being the number-10-in-waiting along with both players Lions’ aspirations and Leinster have a genuine dilemma.

Not that this decision will impact the result. Leinster should win by two scores regardless as Biarritz are a shadow of the team that captured the Bouclier de Brennus two seasons running (2005-06), only missing out on Europe’s ultimate prize due to the boot of Ronan O’Gara, a sniping Peter Stringer and a herculean showing by the Munster eight.

Many of their Rolls Royce operators from that time remain, but Traille is almost 34, while the club’s dynamic duo, Dimitri Yachvili (32) and Imanol Harinordoquy (33), must be feeling the hand of time on their shoulder.

Maybe there’ll be a dying kick from these Basque legends. Motivation is not lacking as this is their only route into next season’s Heineken Cup – making this a €500,000 game. Do or die for a club almost €2 million in the red.

The problem is not the old guard, it’s the supporting cast. Sure, Argentine Marcelo Bosch, dazzling American winger Taku Ngwenya and powerful Welsh man Aled Brew form a back three that can rip any defence apart if provided sufficient space.

The major threat to Leinster is the Biarritz maul. If Hardinordoquy can crank it up, Yachvili will whip them into kicking range. That’s the fear, that Biarritz drag Leinster into a wrestling match.

But Schmidt’s men ain’t got time for that. This is equally important to them. This is about saving their season by winning a third European trophy in three years.

And doing so in Dublin on a Friday night under lights. May 17th is the final. That’s the only acceptable send off the players can give Schmidt. He is leaving, right?