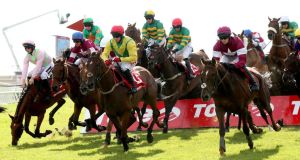 Shanahan’s Turn and Jonathan Burke (third from right) on their way to winning the Galway Plate. Photograph: James Crombie/Inpho

Just eight years previously, Burke’s Plate role consisted of minding the pony that accompanied Sir Frederick from his father Liam Burke’s Co Cork base and which helped yield a famous victory in the summer’s steeplechase highlight.

Only ten months ago the teenage riding sensation landed the prized job as jockey to Ann and Alan Potts and celebrated by winning on his first ride for the owners over fences at Galway.

The Plate remains Galway’s ultimate chasing prize however and Burke grabbed the initiative on Shanahan’s Turn with a circuit to go, leading away from the stands, and repelling all challengers up the final hill to beat The Paparrazi Kid.

Shanahan’s Turn’s trainer Henry De Bromhead also supplied the third, Sadler’s Risk, while Alderwood finished fourth. “It’s great to see the horse back. He had been disappointing but I think there’s every chance he could progress to being a Grade One horse,” said Burke.

“When we straightened up after the last I couldn’t believe the lead we had. I’ve fond memories of Galway. It’s been very good to me.” It might not have been a lead at all had Rule The World not taken a dramatic spill between the last two fences after appearing to clips heels when tracking the winner.

“It felt like we clipped. I had loads of horse under me but they’re the breaks,” reported a rueful Davy Russell. “I’ve known Johnny since he was a child so I’m delighted for him.”

There was a sadder outcome at the second fence when two of the three fallers at that fence, Foildudh and Make A Track, sustained fatal injuries. Foildubh’s rider Ryan Treacy sustained a suspected dislocated collarbone while Danny Mullins went for back X-rays after falling from Indevan at the first. Burke steered a serene course through all of it which proved no surprise to De Bromhead, going one better than his father Harry who saddled Bishops Hall to finish runner- up to Life Of A Lord in the 1996 Plate.

“Alan (Potts) always says he’s looking for old heads on young shoulders and they’re rare. But Johnny is such a good rider and I was delighted to see him roll on with the horse when they weren’t going a mad pace. It was brave to let him roll . . ,” said the trainer.

“He ran disappointingly at Killarney but actually the one man not disappointed was Barry Geraghty who rode him that day,” De Bromhead added.

Geraghty wound up fifth on Shanpallas who wasn’t helped by having to swerve Rule The World in the dip while the 7-2 favourite Alelchi Inios was a place behind in sixth.

For the third day running, Willie Mullins and Ruby Walsh won the opening race with a promising young hurdler, Thomas Hobson who showed a good engine to beat the Dermot Weld hope, Stuccodor.

Weld secured compensation as the favourite Time To Inspire routed his amateur maiden opposition by ten lengths. Jockey Finny Maguire breached the whip rules though and got a two-day suspension. Weld’s odds-on favourite New Agenda was later out of the frame behind Boherbuoy in the final maiden.

The mile handicap saw Sacrificial put up an admirable weight-carrying performance under Colin Keane. The well backed favourite Laganore was repeatedly hampered in trying to secure a run and could finish only fifth. Jockeys Gary Halpin and Billy Lee each received a two-day ban for careless riding. Kevin Sexton sustained a suspected fractured wrist from Catimini’s fall in the mares handicap hurdle won by Lily The Lioness. Catimini had to be put down afterwards.

Galway: by the numbers