Young Irish athletics team gives us many reasons to be cheerful 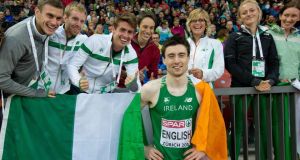 Four track finalists, three national records, two top-10 finishes by the same athlete, and one bronze medal. And not forgetting the nearest and yet furthest position of all.

As a sort of midterm report in the so-called Olympic cycle it certainly wasn’t a bad string of results, and Irish Athletics team manager Patsy McGonagle has described what unfolded in Zurich over the last week as “our best championships, in my experience”.

McGonagle has also signalled the fact there is considerable distance between a European Athletics Championships and the Olympics. Yet what he saw in Zurich - his fifth European championships in succession as Irish team manager - offered plenty of encouragement as the road to Rio begins to shorten, especially given the relatively young age profile of the 24 Irish athletes that competed in Zurich.

“I certainly think we’re developing some very good athletes,” says McGonagle, who also managed the Irish athletics team at the last two Olympics, in London and Beijing, as well as Sydney, back in 2000.

“In many ways this was like a new squad, and I think it terms of numbers now, and possible qualifiers for Rio, we are certainly where we wanted to be, if not a little bit ahead.

“We’d hope too that we can keep going in the right direction, in that another two years can make a significant difference in a lot of these athletes. As long as that curve keeps going upwards we’re certainly in business.”

Indeed the Irish team for Zurich was marked by the absence of the likes of Derval O’Rourke, David Gillick, Paul Hession and Olive Loughnane - all recently retired. Instead, at age 21, Mark English became Ireland’s youngest ever medallist at European Championship level, his bronze medal also Ireland’s first ever podium position in the 800 metres.

The 4x400-metre relay team, who finished fifth in Sunday’s final, their 3:01.67 national record marginally quicker that what Belgium ran to finish sixth at the London Olympics, have an average age of 22. And Paul Robinson, who fell just .17 of a second short of the bronze medal in the 1,500m, is only just 23.

“I know as well that we do need to temper all that by the fact the European Championships are a lot different to the Olympics,” says McGonagle. “But as Europeans go I would rate them as our best championships, in my experience. Even if you take the medal out of it we had several finalists, several personal bests, and several national records. And even getting so many athletes into semi-finals wasn’t something that happened so easily in the past.

“We saw that over the course of the week, that the whole thing was alive, right through to the final session. We felt too that most of the athletes were peaking at the right time and that’s certainly a positive.”

If there was a negative, says McGonagle, it was the glaring lack of a single field event athlete. Tori Pena and Zoe Brown did qualify in the women’s pole vault, yet chose not to compete due to poor form.

“We would definitely look to get more field event athletes up to this level, and there’s no reason why we can’t,” he says. “There is a budget issue, in some ways, in that we do need to get more people in to lead the field events, and structure them in a better way, going forward. It won’t be an easy fix.”

In the meantime, given the fact there is not a single cent of prize money at the European Championships, it’s time for some of the medal winners to cash in - including English, who has been invited to run the 800m back in Zurich on Thursday week, at the Weltklasse, also known as the one-day Olympics, where the star attraction is Usain Bolt.

This time English will be watching the clock, not just his opponents, as he looks to improve the Irish record of 1:44.82, which has stood to David Matthews since 1995. Ciarán Ó Lionáird is also down to compete in Stockholm this Thursday, provided he has no lasting effects from the fall he took in Sunday’s 1,500m final. Thomas Barr, however, has decided to call time on his season, rather than chase any more times over the 400m hurdles.

Ireland’s oldest athlete in Zurich, 36 year-old Rob Heffernan, has every intention of continuing on for Rio, especially given the way his 50km effort ended prematurely last Friday. Heffernan has admitted his problem was purely psychological, not physical, and he is already guaranteed a qualifying place in next summer’s World Championships in Beijing as defending champion in the 50km walk.