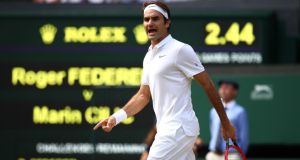 If the younger generation are ready to put the ancients to the sword, there is little sign of it this year. Roger Federer, at 34, represents life’s possibilities. His semi-final opponent, Milos Raonic, at 25 years of age, is the one pretender that has lasted the pace.

Andy Murray, at 29, is the All England Club’s dream ticket and 30-year-old Tomas Berdych is in the semi-final for the first time, a trusted and dangerous player but perhaps a little late to bust down the door of the All-England Club.

Lucas Pouille, the French 22-year-old, made it to the last eight but the horizon today looks largely familiar, Murray coalescing national hopes now that the adoption of the Welsh football team’s has come to an end. That was always just a fostering arrangement anyway.

One thing the players never stop saying is that semi-finals come down to playing big moments. Raonic can beat Federer and has done so twice in 11 meetings, and Berdych can take Murray, as he has done six times in 14 meetings. But what will push two players though to Sunday’s final is mental brawn, stress-hardened thinking.

In that regard, Murray and Federer, given the nature of the heat and pressure of their five-set quarter-final epics, arrive steeled for further success.

“You have to be able play good tennis in the most important moments,” said Murray.

“I fought, I tried, I believed. At the end I got it done. It was great on so many levels,” said Federer after his two-set comeback against Marin Cilic.

Most people don’t understand what mental steel is, or the ability to survive and excel the intensity of genuine Centre Court pressure. Australian Nick Kyrgios does not. Defeated Frenchman Jo Wilfried Tsonga does not and Grigor Dimitrov, once called ‘Little Federer’ but no longer, does not. If talent alone was the measure of success, they would never be outside the top 10.

Just on that basis and the comfort they have on the court, the familiarity of delivering must-make serves, defend break points and roll with the cadence of a match that will at times swing against them, a place in the final is there for Federer and Murray to lose.

Raonic with his variety of coaches and support team and his joint leadership in the ace count with 114, is pushing towards twice Federer’s ace count. But Federer trails him just fractionally in percentage of first serves won, which is 81 per cent against the Canadian’s 83 per cent.

For all of the effectiveness of hitting aces, only Raonic remains in the draw from the top eight boomers. Murray is down at 18 in that department.

“I felt like, okay, this was the first life,” said Federer after beating Cilic. “I’m not going to get many more after this. At least play some free points, try to go for it a little bit, get some balls back, you never know.”

That’s his mood and maybe that of Berdych and Raonic. Certainly John McEnroe is talking up his man Raonic, conceding he was tight when he last played in the semi-final in 2014 and two years on he is two seasons tougher.

Murray, who has never played Berdych on grass, expects more. His improved aggression and greater variety, some of it courtesy of Ivan Lendl, makes him favourite to beat Berdych and win a Novak- free final.

“I want to win,” said Murray. “The best way to do that is fight for every point.”

The Scot knows exactly what’s coming down as he has won their last four meetings, while Raonic has the opposite arrangement with Federer. His two wins against the 17-time Grand Slam champion have come in their last five meetings but none on grass.

“I can beat the best guys not only at the beginning of the tournament, but also in the later stages,” said Berdych.