UFC displays the best and worst of itself in 24 hours 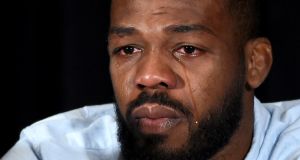 Jon Jones cries as he speaks during a news conference in Las Vegas to address being pulled from his light heavyweight title fight at UFC 200 against Daniel Cormier due to a potential violation of the UFC’s anti-doping policy. Photograph: Ethan Miller/Getty Images

UFC 200 was always intended to be memorable. But not quite like this.

And so it is that an event intended to be a celebration of mixed martial arts, an event capping a trio of UFC cards in Las Vegas from Thursday to Saturday boasting a total of five title fights, was turned on its head.

The final fight of the bunch is what did it. The reaction to Jon Jones testing positive for two as-of-yet unknown banned substances was a manic one.

On Thursday morning, an emotional Jones offered apologies, denials but no explanations for his dismissal, which came after the US Anti-Doping Agency flagged a sample collected in June and apparently notified the UFC, for which it administers a stringent drug testing regime, the previous evening.

Behind the scenes, promoters scrambled to settle on a new main event and put together another fight for Daniel Cormier, which they did posthaste. UFC 200 went from a headliner featuring a talented and troubled light heavyweight, perhaps the best fighter in the history of MMA, vying to regain full control of the 205lb belt from his rival Cormier, to a non-title bout pitting UFC 100 veteran Brock Lesnar versus New Zealand heavyweight Mark Hunt, to a 135lb women’s title fight featuring Miesha Tate and Brazil’s Amanda Nunes.

By Thursday night, just prior to Eddie Alvarez upsetting Rafael dos Anjos at the MGM Grand Garden Arena to capture the UFC lightweight belt – the first of what was now four championship contests on the weekend – news began to circulate that Cormier would remain on the card against former middleweight king Anderson Silva, himself a recently sanctioned performance-enhancing drug user.

Facing “The Spider” Silva at light heavyweight seems like a shoo-in for Cormier, who put in a full training camp and is fit as he ever will be. Meanwhile, Silva has had two months to recover from the removal of his gallbladder. All things considered, it’s wild that this match was put together and licensed.

It truly was a harrowing 24-hour period that displayed some of best and the worst things about the UFC.

Amid sales rumours, looming antitrust lawsuits, advancing co-sponsored pieces of federal legislation that could drastically alter the business of MMA, and persistent rumblings of fighters joining forces to accrue more bargaining power, there are the fights. There have always been the fights, which is why Saturday’s UFC 200 at the T-Mobile Arena remains highly watchable despite Jones’s absence.

The depth of MMA events, particularly the highest-profile kind, has almost always served as bulwark against the kind of havoc a lost main event can bring. UFC 200 is a wonderful example not only of that reality, but of the nimbleness with which Zuffa, the promotional operators behind the action in the Octagon, can operate in times of extreme stress.

Fighters understand this dynamic as well as anyone, and for the 24 men and women who remain on the card, high stakes are numerous. With the exception of one contest (Sage Northcutt versus Enrique Marin), UFC 200 offers a variety of choice cuts that would deservedly take the marquee on less grand stages.

For instance, Jose Aldo fights Frankie Edgar in a wonderful rematch from 2013 that very well could determine who operates atop the UFC featherweight divisions – since it seems less and less likely that current champion Conor McGregor might ever return to 145lbs.

It’s the second contest on the evening’s pay-per-view portion, yet for many fans it is the most interesting bout of the night, not only because of the technical mastery of both fighters but because Aldo has questions to answer following his 13-second KO loss to McGregor in December.

Then there’s Brock Lesnar taking on Mark Hunt in the co-main event. Lesnar’s star power – and sheer physical power – draw the eye, and it’s fitting that the UFC 100 veteran makes his return to MMA from the WWE at this event. Hunt would fight an elephant if the UFC promoted such things, and with Lesnar he’s not so far off. Difficulty in handicapping this contest adds to the intrigue.

The new main event was maligned as a match-up when UFC first announced that Miesha Tate would defend her 135lb title for the first time against Amanda Nunes. This does not seem like the contest that should headline a card of 200’s magnitude, but it is and, in the end, it wouldn’t come as shock if the action surpassed detractors expectations.

Opening the main card, former heavyweight champion Cain Velasquez, the man who took the belt from Lesnar in 2010, fights the tall and dangerous Hawaiian Travis Browne. Both fighters need a win very much, and the competition should be fierce for as long as it lasts.

The pay-per-view is intriguing for an assortment of reasons, and so is the undercard. Bantamweight contender Cat Zingano versus Julianna Pena is a must-watch contest, with the winner placing herself atop the list for a title shot against the Tate-Nunes winner. That bout joins an important welterweight clash between former 170lb champion Johnny Hendricks and Kelvin Gastelum, and former bantamweight titleholder TJ Dillashaw fighting the oft-injured Raphael Assuncao.

UFC 200 has already proven to be a wild ride. All that’s left are the fights.

Hurling Championship 2020: County-by-county guide 05:26
Matt Williams: Ireland’s strategy of ‘heads up attack’ will not work without strategic thinking 05:00
France agree to travel to Dublin for final Women’s Six Nations game 05:00
Fifty days to rediscover the 2020 Championship – with apologies to Paul Simon 05:00
Shellshocked Ireland left to reflect on a self-inflicted defeat 22:41
Here is your handy guide to sport on television this week