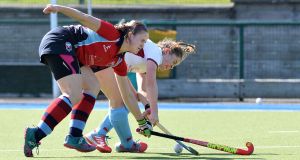 Six days after winning the Irish Senior Cup, UCD have added another trophy to their collection, as well as qualification for European competition next season, with the students clinching the Hockey League at Rathdown on Saturday by beating Hermes-Monkstown 2-1.

Hermes needed just a draw to take the title and came closest to taking a first-half lead when Nikki Evans’s reverse effort hit the crossbar, UCD’s Clodagh Cassin also denying them with some sharp goalkeeping, notably with a fine save from a Chloe Watkins’s penalty corner.

But when Evans gave Hermes the lead on 38 minutes, after she was set up by Anna O’Flanagan, they looked well on course to retain the title they won so comfortably last season.

UCD’s Lena Tice, though, turned the game on its head when she converted penalty corners with direct strikes in the third and final quarters, the Irish hockey and cricket international’s goals inflicting on Hermes their only defeat of the 18-game campaign.

The students remained unbeaten throughout, their sole defeat all season so far coming in the final of the Jacqui Potter Cup when they fielded a weakened side.

The teams are likely to be the main contenders again for the Champions Trophy later this month, with Cork Harlequins and Loreto completing the line-up for the tournament.

The individual performance of the weekend came from Loreto’s Irish under-18 international Sarah Torrans who scored all five of their goals in their win away to Belfast Harlequins, her hat-trick coming as early as the eighth minute. That result, combined with Pembroke Wanderers’ 2-0 win over the already relegated Ulster Elks, Rachel Scott and Erica Markey getting their goals, means Pembroke have retained their Hockey League status on goal difference over Harlequins who must now go in to a play-off.