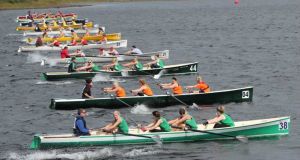 Thousands of rowers will compete in national coastal rowing championships this weekend at two separate events.

Coastal rowing is a very popular sport in pockets around Ireland. In the early 1990s, and All-Ireland Championships was inaugurated, with the Irish Coastal Rowing Federation (ICRF) , a voluntary body, running competitions for different craft. It grew into a huge annual event.

The split developed in stages. Some clubs had become disenchanted with the ICRF, citing governance issues and saying there were very few changes at the top.

Crews which wanted to row sliding-seat boats in international events run by world governing body Fisa had to be sanctioned by Rowing Ireland. Within a few years, Rowing Ireland had an offshore section and a coastal rowing section. A sizeable group of clubs voted to compete under the aegis of Rowing Ireland, who this year will run championships for both Offshore (September 8th) and Coastal Rowing. Their inaugural Irish Coastal Rowing Championships this Saturday and Sunday has an entry of 333 crews from more than 20 clubs and 1,655 rowers and coxes.

The All Ireland Coastal Rowing Championships in Ferrybank, Co Wexford, will run from Friday to Sunday. Mary B Teahan of the ICRF says that they are “delighted” with their entry. “We have 355 crews entered from 33 clubs,” she says. The event will again have a live video feed on Saturday and Sunday (crvlive.com)

There has been a mediation process, and both sides are toning down critical rhetoric. Teahan says the ICRF is “very excited about the future”, and repeatedly notes that they are communicating with Rowing Ireland, a point confirmed by the Rowing Ireland’s chief executive Michelle Carpenter.

The high-performance side of Rowing Ireland is focused on the World Championships in just over three weeks. A group of lightweights and the heavyweight pair of Mark O’Donovan and Shane O’Driscoll is in camp with lightweight coach Dominic Casey in Banyoles in Spain, while the bulk of the heavyweight group are with high performance director Antonio Maurogiovanni in Gavirate in Italy.

Karol Doherty was trialled for the World Championships in a pararowing single but did not make it. It is understood that the City of Derry man will continue to be supported in his quest to make it to the Paralympics.

Ireland did not send a team to Shanghai for the World University Games, but Portadown and Queen’s University man Sam McKeown won gold, representing Britain in the single sculls. The British women’s team wore ribbons in memory of Ailish Sheehan, who died in an accident at the event in 2016.

The announcement of additional Government funding for rowing – €40,000 for programme spending and €90,000 for capital spending – is welcome but strangely arbitrary. Overseas camps, which are vital given Ireland’s tricky climate for rowing, come under the first heading. Perhaps the two figures could be switched?

And what is the criteria for this kind of spending of taxpayers’ money? Hockey is on a high and good luck to all involved, but if the priority is medals in Tokyo 2020 what betting woman or man would realistically stake big money on it ahead of Ireland’s proven rowing crews, which have taken medals in Olympic events?

What of the next generation? Ireland’s four crews took two 11th places, a 14th and a 16th at the World Junior Championships in the Czech Republic.

Maurogiovanni was enthused by having juniors training with the under-23 and senior athletes at the NRC. He said that the results showed how tough it was to make the A and B finals at World Championship level, but he had “a strong belief that we can place crews in the A final in the near future”. The athletes had bought into the high performance model he has set up. “I strongly believe that their domestic coaches will be very supportive.”

Countries which send big teams to World Junior Championships and do well have strong structures at junior level – often through professional or semi-professional coaching at schools level. In the absence of this, Ireland has been slow to send rowers to the biggest show. Paul O’Donovan, who may be the greatest Irish oarsman, competed twice at the World Juniors, in 2011 and 2012. He reached the A Final once, finishing fourth.

Is it still a good idea to give juniors such ambitious targets? James Mangan is well-placed to judge. The Castleconnell coach who has worked in the US system – he was a founder of Saugatuck club whose athletes won multiple medals at the World Juniors – believes that sending athletes to the World Championships makes it easier to attract donors. Mangan has been a conduit for such funding for Irish rowing.

Government finance for rowing in Ireland falls well short of what it is in similar countries, such as New Zealand and Denmark.

1 Super Rugby AU offers glimpse of rugby’s future if law changes are adopted
2 Solskjær says United’s unbeaten run is ‘nowhere near’ enough
3 Cam Newton broke the mould: Can his flame be rekindled at the Patriots?
4 Seán Moran: This strange year would have been perfect for inaugural Tailteann Cup
5 Tipping Point: DeChambeau’s transformation raises questions, but who will ask them?
Real news has value SUBSCRIBE

Ben Youngs pens a new deal with Leicester 12:05
Solskjær says United’s unbeaten run is ‘nowhere near’ enough 11:53
Eric Dier given four-game ban for confronting fan in the stands 10:59
A glimpse of rugby’s future; assessing Herbert Chapman’s impact on soccer 07:15
England and West Indies defy odds to begin summer Tests 07:00
Here is your handy guide to sport on television this week