After the recent talk of cheating these championships were needed 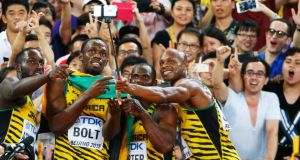 Nine days and every possible superlative later not even Sebastian Coe could have envisaged it all ending so majestically. And not just the way Asbel Kiprop won the 1,500 metres to cement Kenya’s position at the top of the medal table.

Because for a sport reportedly on its knees, the 15th World Athletics Championships could hardly have been more triumphant. Not everyone will believe everything that unfolded inside the Bird’s Nest and yet one year before the Rio Olympics the big stars certainly aligned in spectacular style.

And none bigger than Usain Bolt, who completed his superstar status in Beijing by anchoring Jamaica to the 4x100m relay title, in a championship record 41.07 seconds - extending his record overall haul of World Championship gold medals to 11. That also brought Jamaica’s gold medal tally in Beijing to seven - the same as Kenya: only with 16 medals in total, compared to Jamaica’s 12, Kenya left as the ultimate superpower in world athletics for the first time.

Great Britain also enjoyed their best ever championships, including four gold medals, while previous superpowers, namely Russia, dropped off considerably - some evidence, perhaps, that all the doping allegations surrounding their previous performances have helped level that playing field.

That Ireland failed to make the medal table was hardly surprising, although Rob Heffernan - who endured a difficult two years since winning gold in the 50km walk in Moscow two year ago - offered some consolation. Indeed Heffernan rated his fifth place finish in Saturday’s 50km walk as on a par with Moscow, realising too he’d offered some consolation for an otherwise disappointing championships from an Irish perspective.

“In relative terms, this is a medal for me,” said Heffernan, who certainly chased hard for a medal, although there was no denying Matej Tóth from Slovakia, who dominated from the start win gold. “And to finish fifth in the world, coming off the problems I’ve had, is as good as winning in Moscow. I’ve had two hernia operations, in the last year. So it’s still a massive, massive performance. I always want to win, but being realistic, it’s still very positive, and gives me a huge platform for me, going into Rio next year.

“And I knew the whole Irish team needed a result. We’ve had no finalists, no big results, so it was very important for me, as a team leader, to get a solid result for the team, and for athletics.”

The Irish men’s 4x400m relay - Brian Gregan, Brian Murphy, Thomas Barr and Mark English - also left Beijing with the consolation of an Irish record, although their 3:01.26 was still short of making the final. The USA did go on to win that title, clocking 2:57.82, although Jamaica won the other three relay titles, which meant the USA ended up third on the medal table, equalling their worst ever placing.

The Americans were at least celebrating the only world record in Beijing, when Ashton Eaton improved his own decathlon mark by a mere eight points. Still, with five championship records, including an extraordinarily fast finish yesterday from Ethiopia’s Almaz Ayana to win the women’s 5,000m in 14:26.83 - there was ample evidence to indicate these were the most competitive World Championships of all time.

Indeed Ayana denied Ethiopian compatriot Genzeba Dibaba a 1,500m-5,000m double (Dibaba ended up third), so the only distance running double went to Britain’s Mo Farah - who on Saturday added the 5,000m title to his 10,000m gold won. Farah’s winning time of 13:50.28 may have been the slowest in World Championship history, but that didn’t matter: his 1:48.6 last 800m was enough to extend his record haul of gold medals on the track, because when the Olympics are also included, Farah has also now completed the 5,000m-10,000m double three times: no one else has done it more than twice. Like Bolt, the Rio Olympics can’t come soon enough

Then, the final distance running title went to Kiprop, who won his third consecutive 1,500m gold in surely the most impressive style of any. The impossibly long-striding Kenyan, who also won the 2008 Olympic title inside the Bird’s Nest, didn’t so much toy with the field as mock it: then, with quite frightening confidence, Kiprop kicked them all to death in the final 200m to win in 3:34.40. Elijah Manangoi kicked almost as hard to win silver for Kenya, too.

So, nine days after many people were wondering why Coe would want to take over the presidency of the IAAF, his timing, just like his old kick, may well have been perfect.