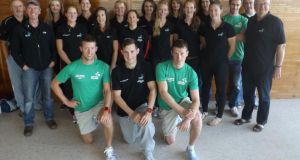 The Ireland team and coaches prior to departing for the World Rowing championships, which start on the Bosbaan course outside Amsterdam on Sunday. 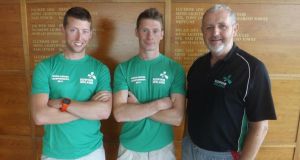 The Ireland men’s pair of Mark O’Donovan and Niall Kenny, who will be competing at the World Championships in Bosbaan, near Amsterdam, which start on Sunday, with coach John Holland.

Rain and wind are likely to greet the Ireland team as they take on the Bosbaan course in Amsterdam at the World Championships, which begin on Sunday.

“They have temperatures lower than us and they have winds stronger than us that are going all over the place. And they have rain every day – which we don’t. It’s unbelievable,” said coach John Holland as the team gathered in Cork Airport yesterday.

Holland has been coaching the men’s lightweight pair, one of Ireland’s top hopes of an A final place and perhaps a medal.

Niall Kenny and Mark O’Donovan were set to compete in the World Cup regatta in Aiguebelette but had to pull out for personal reasons, so they are an unknown quantity, but they have been performing brilliantly in training, and O’Donovan competed in a lightweight single scull in Aiguebelette and, remarkably, won the C final. However, they won’t be seeded and thus have an unpredictable draw.

Ireland’s three crews go in the heats on Sunday. Sanita Puspure has taken a European bronze medal and a sixth and seventh place in her two World Cup events in 2014: success would be an A final place, establishing her in the top six in the world in this blue riband event.

For the women’s pair of Lisa Dilleen and Leonora Kennedy a top 11 placing would be a reflection of their progress – and a guarantee of an Olympic place for the boat if they reproduce it at next year’s World Championships. Lightweight sculler Paul O’Donovan (20) would surely be thrilled to come out of his first senior World Championships matching or coming close to his B final win in Aiguebelette.