Sri Lanka give Ireland a grilling under hot Belfast sun 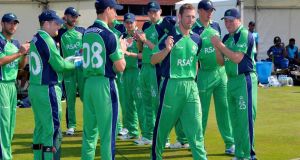 Andrew White leads the team out against Sri Lanka to become Ireland’s most capped player with 227 caps. Photo: Rowland White/Presseye/Inpho

After making 283 in the first encounter, Sri Lanka skipper Ashan Priyanjan had no hesitation in batting after winning the toss. He proved the star of the show with a knock of 111 from just 70 balls as they made a colossal 329 for eight off the 50 overs.

He wasn’t the only one in a hurry with Chaturanga de Silva clubbing 60 off 27 following an opening stand of 104 between Danushka Gunathilaka (55) and Mahela Udawatte (60).

Young seamers Peter Chase and Eddie Richardson bore the brunt, going for a combined 154 runs in 17 overs, with Sri Lanka adding 99 runs in seven overs late on before Craig Young came back to take two late wickets to finish with four for 44 from his 10 overs. The only other bowler to survive the onslaught was Andrew White, whose 10 overs off spin went for just 29 including the breakthrough wicket of Gunathilaka.

With Chris Dougherty losing out to the returning Stuart Thompson, Stuart Poynter was promoted to opener after his century in the opening game. The move didn’t pay any dividend as the Durham player got a leading edge first ball with Seekkuge Prasanna taking an easy return catch.

The leg-spinner accounted for Andrew Balbirnie in the third over on his way to a five-wicket haul, while paceman Dushmantha Chameera again caused problems to the Irish batsmen, taking the wickets of John Anderson (32) and skipper Andrew Poynter (one) to reduce Ireland to 77 for five.

Thompson (51) and White (45) added 66 for the sixth wicket and contributions from Andrew McBrine (31) and Eddie Richardson (27) helped Ireland make it over 200 before Prasanna and Chameera wrapped things up in the space of seven deliveries by taking the last three wickets as Ireland were bowled out for 222.

Ireland will look to salvage something from the series in Sunday’s game at Coleraine.