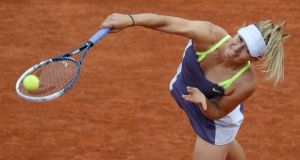 Maria Sharapova of Russia serves to Zheng Jie of China during their women’s singles match at the French Open tennis tournament at the Roland Garros stadium in Paris. Photograph: Stephane Mahe/Reuters

Maria Sharapova called for HawkEye to be used at the French Open after being on the wrong end of a dubious call in her third-round win over Zheng Jie at Roland Garros today.

The defending champion found herself 4-1 down in the second set after umpire Emmanuel Joseph ruled she had served a double fault on break point even though her second serve appeared to be in.

Sharapova fought back to win 6-1 7-5 but feels such a mistake should not be allowed to happen. The French Open is the only grand slam tournament that does not allow players to challenge calls using HawkEye, with disputed calls instead assessed by umpires checking marks in the clay.

Sharapova said: “It’s not even about the fact of the call, whether it was in or out. I think for me it was the fact that the umpire did not recognise that the mark he pointed out was about a foot away from the actual mark. So that’s a huge question mark, to begin with.

“All the other grand slams have HawkEye. And I know these types of situations, although much more rarely on the clay, happen. Why not? Why don’t we have a system like this? Is it a money concern? I don’t think so.

“This is just absolute proof that it’s a big point and it can happen in any situation. So I hope he (Joseph) is able to acknowledge that that was not the right thing to say.”

Sharapova won the first five games but Zheng took five of the next seven and the Chinese player served for the second set but could not take it.

“The good thing I can take from that is that I did play a good set, so that was a positive. I put myself in a good position,” Sharapova said. “But then I gave her all the momentum starting from the first game of the second set, which is not a position that you want to be in. She’s a tough player. She’s capable of turning matches around.

“Down 1-4 is not a score that I want to be in, but I am happy with the way I fought back and I found a way to win that second set without having to go into a third set.”

Sharapova next meets 17th seed Sloane Stephens, a three-set winner over New Zealand’s Marina Erakovic today and a rising star of the women’s game. The pair met two weeks ago in Rome, when Sharapova lost just three games, but she is expecting a much tougher time on Monday.

The second seed said: “This is a grand slam stage. I’m sure she will want to change a few things around and play a better match. And you expect that at this type of tournament. There is no doubt that I have a tough one ahead of me.”

Third seed Victoria Azarenka also had to show her battling qualities as she fought back from a set down to defeat Frenchwoman Alize Cornet 4-6 6-3 6-1.

There were 15 service breaks in all, with Azarenka serving 10 double faults in breezy conditions, and the Australian Open champion was far from happy with her display.

“It was a tough match,” she said. “I don’t think I played really the right way. I really felt that I left my serve at home. But if I can win with serving like this, that’s pretty remarkable.”

Azarenka’s next opponent is 2010 champion Francesca Schiavone, who has dropped to 50th in the world after a poor season but found form of old in defeating 13th seed Marion Bartoli 6-2 6-1.

Unseeded American Bethanie Mattek-Sands caused the biggest upset of the women’s tournament so far when she dumped out Li Na in the previous round and she continued her run with a 4-6 6-1 6-3 victory over Paula Ormaechea.

Awaiting Mattek-Sands in the fourth round will be 12th seed Maria Kirilenko, who has been making easy progress through the draw and today beat Stefanie Voegele.